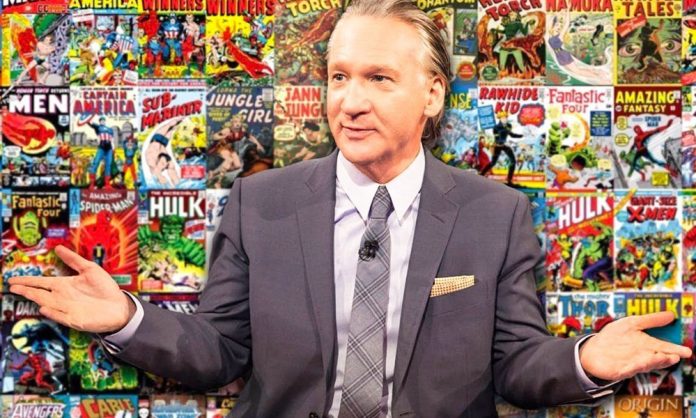 Bill Maher has expanded on previous comments he made about Stan Lee and the culture of comic book fans. Back in November, Bill Maher wrote a blog response that used Lee’s death to trash comic book culture. Although he had already responded to the backlash in the week following, the Real Time host doubled down on his sentiments during Friday night’s episode.

“To every person on social media who’s asked me since November, ‘Bill, what do you have to say about Stan Lee?’ – and to every paparazzi outside a restaurant who’s still shouting at me, ‘Bill, what about the Stan Lee thing?’ Okay. Your day has come,” he warned.

Maher clarified that his initial blog — in which he wrote America is in “deep, deep mourning for a man who inspired millions to, I don’t know, watch a movie, I guess” — was “no way an attack on Mr. Lee but took the occasion of his death to express my dismay at people who think comic books are literature and superhero movies are great cinema and who in general are stuck in an everlasting childhood.”

“Bragging that you’re all about the Marvel universe is like boasting that your mother still pins your mittens to your sleeve,” he continued. “You can, if you want, like the exact same things you liked when you were 10,” Maher added, “but if you do, you need to grow up. That was the point of my blog. I’m not glad Stan Lee is dead. I’m sad you’re alive.”

The host took specific aim at Kevin Smith, who blasted Maher after his Lee comments. “Again, my shot wasn’t at Stan Lee,” Maher reiterated, “it was at, you know, grown men who still dress like kids.”

Smith himself then responded, Tweeting: “Yes, Bill Maher took a shot at me during his show last night, in the midst of his latest rant about Stan Lee and adults who like comic books. No, I’m not mad at all. Bill may talk tough but he’s a stoner like me and a real pussycat when confronted.”

Last year, Smith went as far to invite Lee to come and live with him in his final months, as concern continued to grow around the 95-year-old’s care and wellbeing.

Meanwhile, Smith recently confirmed the go-ahead for a re-boot and new installment of Jay And Silent Bob.