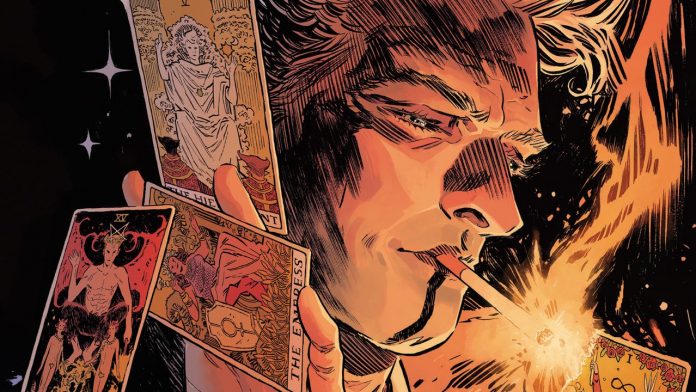 John Constantine is taking back up the mantle of Hellblazer to join Neil Gaiman’s Sandman Universe this fall.

Constantine’s new adventures will take place in the Sandman Universe of books at DC, that’ll begin with a one-shot issue in October and then continue in a new ongoing series by writer Simon Spurrier and artist Aaron Campbell in November. “Year One was just the start. Now you get to inhabit the worlds, books, and houses we built for you,” Sandman Universe writer and architect Neil Gaiman said in a press release.

Along with a summary of the one-shot, you can see the covers for The Sandman Universe Presents Hellblazer #1, by Bilquis Evely, and John Constantine, Hellblazer, by John Paul Leon, below.

In THE SANDMAN UNIVERSE PRESENTS HELLBLAZER #1, the story begins in a moment originally seen in Gaiman’s miniseries THE BOOKS OF MAGIC. John Constantine finds himself haggard, bloody, and dying in an epic magical war—a battle that will soon consume the world. As he lies there, the vision of a young Tim Hunter stands above him, the naive youth seeing firsthand what his destiny holds. Horrified, Hunter flees back into the past, and Constantine is left behind to die.

Now, years later, Constantine reemerges, physically un-aged but with all of his memories intact—and yet the world has passed him by. Constantine must now fathom a new world torn apart by the same old political and social woes, while attempting to discover how he returned after all this time. But most troubling of all are the rumors of a new young magician named Tim Hunter, a boy destined to be either the greatest sorcerer of all, or the greatest threat to the world. If history is repeating itself, then is it John’s role to die all over again? Or is John here to stop the cycle—and stop Tim Hunter?