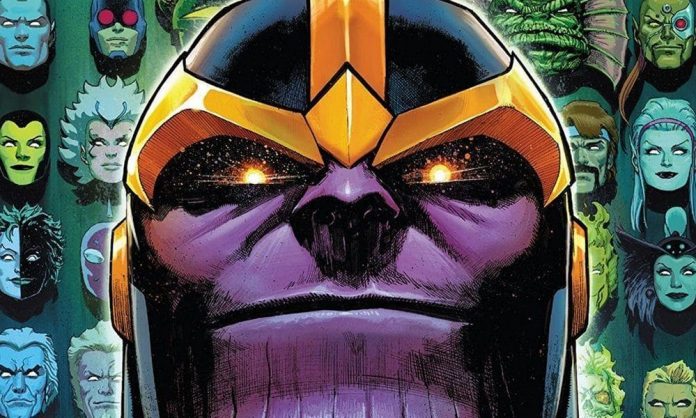 Thanos is dead! Long live the NEW Thanos! It should surprise no one that the supervillain’s recent decapitation isn’t the end of his story, and the new Guardians Of The Galaxy series reveals that while Thanos’ body may be dead, his consciousness has been transferred to a new living host.

In new preview pages first released by Screen Rant, Peter Quill drunk dials his former lover Kitty Pryde and well…it goes just about as well as one would expect.

With the majority of the cosmic heroes presumably dead after Guardians of the Galaxy #1 — Quill and his latest motley crew are the universe’s best chance at stopping a new incarnation of Thanos from rising to power. That is, of course, should Quill have a minute or two to put down the bottle.

While Peter and Kitty’s conversation takes up three of the four pages released, the fourth deals with the Black Order continuing their search of Thanos’ head so that they can reassemble their adoptive father’s complete body. Though she’s not seen on-page, the last panel includes lettering is styled as though an Asgardian is speaking, hinting the Black Order’s interim boss Hela is helping them out in the field.

The full synopsis for the upcoming issue is below.

GUARDIANS OF THE GALAXY #2

Guardians of the Galaxy #2 drops February 20th. Keep scrolling to see David Marquez’s cover of the second issue plus the four first pages with art from Geoff Shaw!