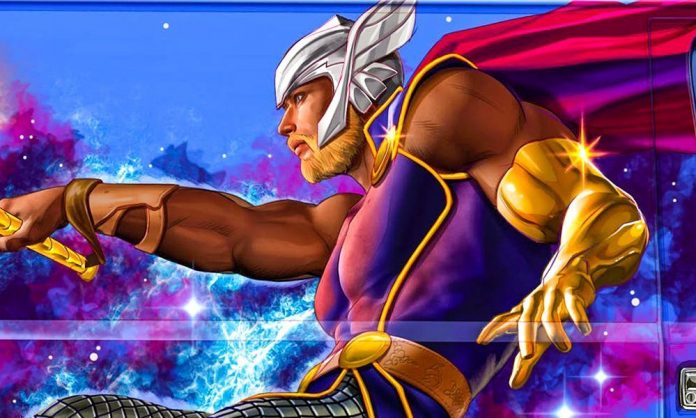 In the months leading up to Marvel’s new War of the Realms event, details are starting to emerge. That includes cover art by Ms. Marvel artist Greg Horn. On Monday, Marvel released a variant cover for War of the Realms #1, featuring a unique van with a wrap-around image. The publisher also announced a special midnight retail release of the event’s first issue, with more details to come. The variant, which pays homage to Michelangelo’s The Creation of Adam, details the battle between Thor and Malekith the Dark Elf on the side of a van.

The forthcoming event promises an epic crossover where Thor will enlist the heroes of Earth to fight with him against the enemies of Asgard, who have united under Malekith’s leadership. According to CBR.com, in issues leading up to War of the Realms, Malekith took advantage of Thor’s inability to travel throughout the Ten Realms due to the destruction of the Bifrost by building his own. Now with the “Black Bifrost,” Malekith the Accursed will be able to strengthen his control over the remaining Nine Realms and bring his focus to Midgard, where his armies will clash with its guardians, including Thor.

Thor and Malekith have been consistent enemies since the 1980s but, in recent years, Jason Aaron upgraded the ruler of the Dark Elves to become his main adversary in many of his Thor storylines. Horn’s variant hints that their bad blood will be explored in this event.

Greg Horn’s landscape cover will be available as a War of the Realms #1 variant cover when the series begins in April 2019.


(The Punisher Showrunner Wants To Produce A “Blade” TV Show)