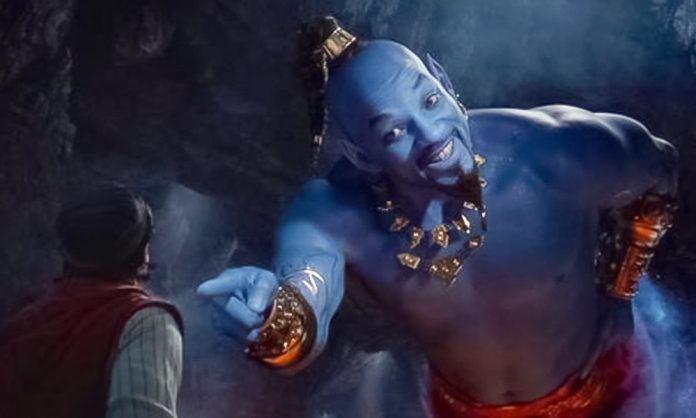 Social media exploded after seeing Will Smith take on the role that Robin Williams made famous. It ended up creating quite a few memes in the process. Will Smith and Guy Ritchie think some of the backlash was funny.

Disney did not get the response they were hoping for when they unveiled their first look at Will Smith as the Aladdin Genie. It’s a lot easier for news to spread these days with the internet, especially bad news or anything with negativity attached. The new Aladdin Genie was one of those things and it felt like it was just getting worse as time went on.

Disney argued that the CGI work wasn’t 100% finished at the time of the first big reveal. This still didn’t stop social media from piling on. Will Smith had this to say about the situation:

“It was very funny. There was a Sonic the Hedgehog / Genie frog. Everything is under such critical scrutiny. I came up in an era where there was no internet. It’s a new thing that I’m trying to get a handle on.”

For Guy Ritchie, it was also a new experience. The director believed that the public perception of Aladdin changed for the better when the full length trailer was released in March.
Ritchie claims fans have been apologizing to him since the full trailer dropped.

Will Smith is bringing his personality to the project and offering a fresh take on the character, which should be judged after the movie has been seen, not before it. However, social media is still having a good time making fun of the live action Aladdin.

Aladdin hits theaters on May 24th