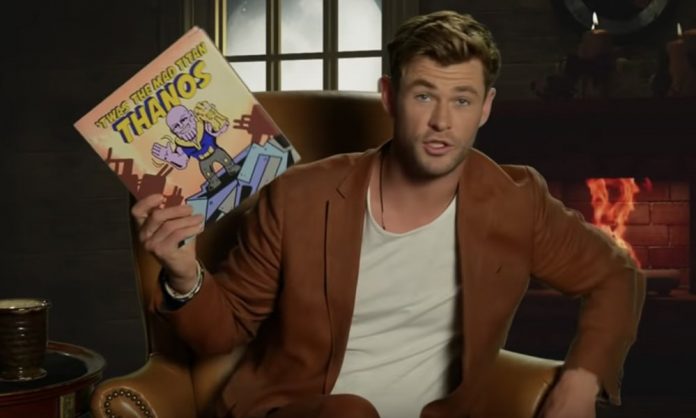 Kicking off Avengers week on Jimmy Kimmel Live!, members of Endgame‘s ensemble cast sat down to do a reading of ‘Twas The Mad Titan Thanos – a lighter spin on the tragic events of Infinity War specifically geared for kids. Mark Ruffalo, Scarlett Johansson, Chris Hemsworth, Don Cheadle, Jeremy Renner and Chris Evans took turns in reading the book – most of them breaking character for personal commentaries on the what went down in Avengers 3.

The simplistic art of Thanos drew some bleeped-out criticisms from the cast, as did the forced rhyme of “Groot” and “soot”: “You can’t find something to rhyme with ‘to turn into soot?'” griped Cheadle.

Most of all, though, the Avengers seemed to be taking the opportunity to blame each other for the mistakes their characters made throughout the film — particularly Thor, who we’re reminded, “should have gone for the head.”

The makeshift children’s book, like the movie itself, ended with half of the heroes being turned to dust in the Decimation. However, it also puts in a plug for a hopeful resolution in the upcoming Avengers: Endgame: “But the Avengers may have a few more last tricks. You can find out in theaters in April two-six.”