Home Movie News Back To The Future: The Musical Is Out With a New Trailer 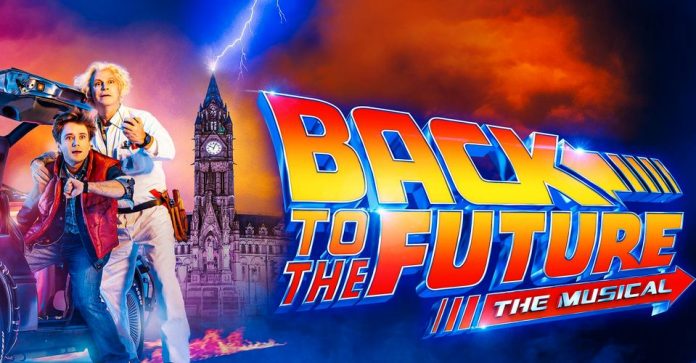 The musical adaptation of the 1985 blockbuster, Back to the Future, gets its first official trailer, which promises an explosive, electrifying performance. The show has received glaring reviews by critics, and the trailer teases all the iconic moments that made the original film a pop culture phenomenon.

In the spirit of the franchise’s longevity, Back to the Future: The Musical celebrates the original film, following Marty McFly and Doc Brown on their adventure back in 1955. According to writer Bob Gale, the musical aims to “retell our story on stage in a brand new way.” The show celebrates that history with familiar hits from the movie, including, among others, “The Power of Love” by Huey Lewis, “Johnny B. Goode” by Chuck Berry, “Earth Angel,” and “Back in Time.” Multi-Grammy Award-winners Alan Silvestri, who scored Avengers: Endgame, and Glen Ballard, have written new, original music for the play. Director Robert Zemeckis and writer Bob Gale, the film’s original creators, are at the helm of the adaptation.

Back to the Future: The Musical was scheduled to premiere in the West End in 2015, the year Marty McFly and Doc Brown traveled to in Back to the Future Part II. Jamie Lloyd was on board to direct the show but left the production, citing creative differences with Zemeckis. Lloyd’s withdrawal led to a prolonged search for a new director, which eventually marked the departure of the entire original creative team. The show premiered five years later at the Manchester Opera House, but the theater soon closed due to the COVID-19 pandemic after just a few weeks. Finally, after a tumultuous journey, the show opened in August 2021 at the Adelphi Theater, and fans can now enjoy it in an extended run, until July 3, 2022.

Back to the Future is a franchise that always seems to stay fresh and loved by fans. New merchandise is still being released, and artifacts from the movies, such as the historic DeLorean, are still revered as pieces of film history.

Back to the Future: The Musical is directed by Tony Award-winning director John Rando and boasts a Tony and Olivier Award-winning team, with Tim Hatley designing the sets and costumes. Back to the Future: The Musical stars Olly Dobson as Marty McFly, Roger Bart as Doc Brown, Hugh Coles as George McFly, and Rosanna Hyland as Lorraine McFly. The cast also includes Aidan Cutler as antagonist Biff Tannen, Courtney-Mae Briggs as Jennifer Parker, Mark Oxtoby as Gerald Strickland, Will Haswell as Dave McFly, and Emma Lloyd as Linda McFly.