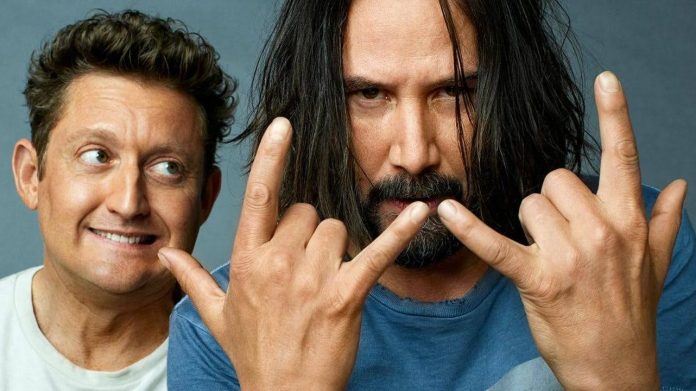 Bill & Ted Face The Music has officially cast the roles of the duo’s grown-up children.

According to The Hollywood Reporter, Brigette Lundy-Paine and Samara Weaving have joined Bill & Ted Face the Music as the title characters’ daughters. Lundy-Paine will play Ted’s daughter Billie Logan, while Weaving has landed the role of Bill’s daughter Thea Preston. The two are, of course, named after their father’s best friend.

“When we saw Samara and Brigette together, it was like deja vu,” producer Scott Kroopf said in a statement. “It was exactly the way we felt when we first saw Keanu [Reeves] and Alex [Winter]. We are so thrilled to have this funny and unique pair join the Bill and Ted team!”

The pair, played by Alex Winter and Keanu Reeves and known collectively as the rock band Wyld Stallyns, first debuted in 1989’s Bill & Ted’s Excellent Adventure. On the verge of failing high school, they were aided by a man named Rufus (George Carlin). Announcing himself as from the future, he revealed that together they were destined to write the music upon which a peaceful, utopian world would one day be formed. Gifted with a time-traveling phone booth, Bill and Ted journeyed through history in order to guarantee they passed their final test and ensure they weren’t separated. The film was a surprise hit, prompting the 1991 sequel, Bill & Ted’s Bogus Journey.

According to the film synopsis,

To fulfill their rock and roll destiny, now middle-aged best friends William ‘Bill’ S. Preston Esq. (Winter) and Theodore ‘Ted’ Logan (Reeves) set out on a new adventure when a visitor from the future warns them that only their song can save life as we know it and bring harmony to the universe. Along the way, they will be helped by their families, old friends and a few music legends.