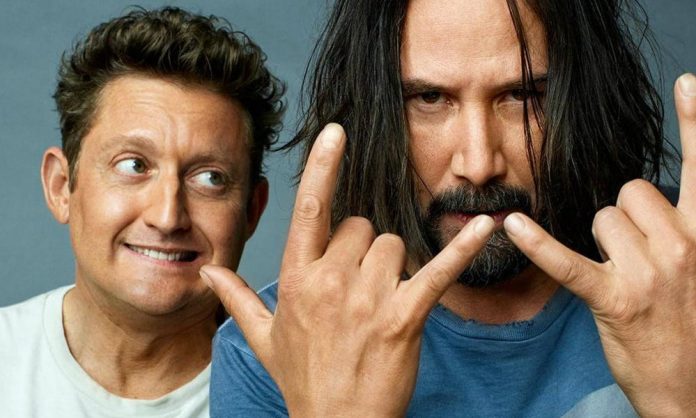 Orion has revealed that Bill & Ted Face the Music will reach theaters next year on August 21, 2020. Winter and Reeves themselves announced the news in a video, where the pair thank their fans for their longstanding support in making the threequel a reality. You can check the clip out, below.

Here is the new synopsis for the film:

To fulfill their rock and roll destiny, now middle-aged best friends William ‘Bill’ S. Preston Esq. (Winter) and Theodore ‘Ted’ Logan (Reeves) set out on a new adventure when a visitor from the future warns them that only their song can save life as we know it and bring harmony to the universe. Along the way, they will be helped by their families, old friends and a few music legends.

Although they might be joking, the two say they “might, actually, hopefully make a movie this summer,” which does make it sound like the film might not be 100 percent happening, but the one thing that’s clear is how grateful they are to their fans, which date back to the first movie, Bill & Ted’s Excellent Adventure. Still, regardless of the possible confusion of what the two said, the video does end with a title card that says the film will be in theatres summer 2020.

Bill & Ted Face the Music is directed by Dean Parisot, written by Chris Matheson and Ed Solomon, and stars Keanu Reeves and Alex Winter. The film is slated for a summer 2020 release.