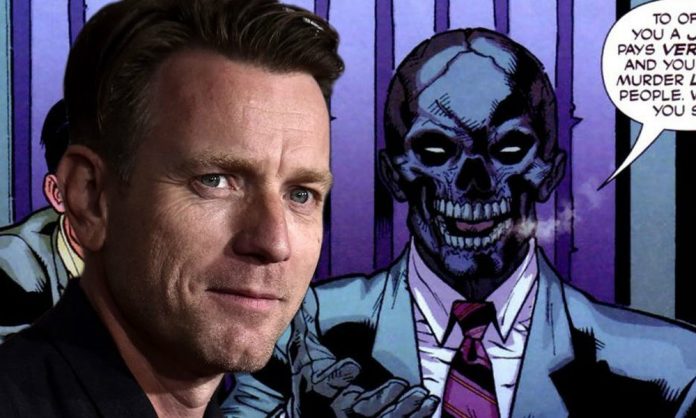 The Birds of Prey will be facing off against Black Mask in the upcoming film, and one DC fan decided to give the DC villain the poster treatment. Ewan McGregor co-stars as Roman Sionis aka Black Mask, a villain who threatens the life of a Quinn associate, Cassandra Cain.

Created by Dough Moench and Tom Mandrake, Black Mask first appeared in the 1985 comic Batman #386. As a child, Roman Sionis is dropped on his head and raised by pretentious parents in Gotham City. He works at Janus Cosmetics and ultimately kills both parents, thus inheriting the family fortune. Meanwhile Bruce Wayne oversees Wayne Enterprises. Sionis becomes Black Mask after being struck by a lightning bolt, which prompts him to make a customized mask out of his father’s casket. On Fox’s TV series Gotham, Sionis is portrayed by Todd Stashwick. Last November, McGregor was officially cast as Black Mask in Birds of Prey, thus marking the character’s first appearance in a live-action feature film.

Birds of Prey is currently filming and is already becoming one of the more anticipated movies in DC and WB’s stable. Black Mask will be brought to life by McGregor, and while we don’t have an official poster featuring him just yet, William Gray decided to feature that trademark mask of his in a poster.

The poster features his black skull mask sitting on the ground and it looks stained with blood that is also pooling on the ground underneath it. Now, whether that’s his blood or someone else’s remains to be seen, but since Black Mask is not known for his patience with people, we’re betting it’s not his.

You can check out the poster above, and you can find more of William Gray’s art on Instagram.

“Quick concept of a teaser poster for Black Mask in Birds of Prey – Done in Photoshop”As for McGregor’s future as Black Mask, reports have suggested that he may square off against Batman in a future DCEU film, but that may ultimately depend on how the character is received upon Birds of Prey’s release next February. Given the Black Mask mythology and Ewan McGregor’s resume as a performer, it seems likely that the Gotham City baddie will ultimately become a central figure in DCEU films beyond Birds of Prey.

(Will Smith Challenges The Black Panther In Hilarious Parody Video)