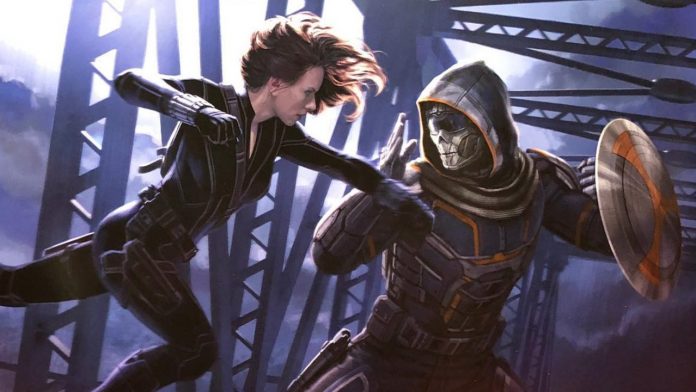 Marvel artist Andy Park shared keyframe artwork from the Black Widow solo film featuring Black Widow battling Taskmaster. The image depicts Widow and Taskmaster fighting on a bridge, giving fans a detailed look at the mercenary. Instead of his skull-face from the comics, it seems to be a metallic mask along the lines of Iron Man and Doctor Doom, with a visor. He has his signature hood and shield, as well as the silver, blue and orange color scheme shared by his comic book counterpart.

This week at San Diego Comic-Com a load of new information was released about the upcoming flick. The release date for Black Widow was confirmed for May 1, 2020. Fans who attended the panel were also treated to official footage from Black Widow, and by the description, it seems that Park’s artwork came to life for one of the clips. The cast of Black Widow was also confirmed at the event, many of whom had been previously reported.

Taskmaster has gathered a large fanbase ever since his introduction in the 1980 comic The Avengers #185, and from this artwork, it seems like Black Widow is staying comic accurate to Taskmaster’s costume.