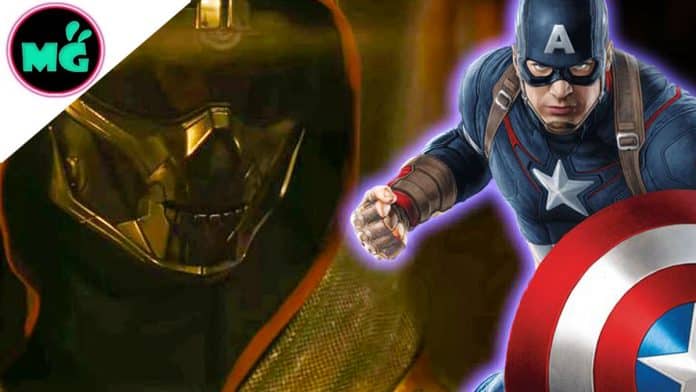 For a long time now, Marvel has released trailers for the studio’s next big release during the Super Bowl — and this year is no different. During Super Bowl LIV, the studio released a new television spot for the upcoming Black Widow solo film. Set prior to the events of Avengers: Infinity War, the film will delve more into Natasha Romanoff’s past, revealing her first family, long before the Avengers.

The new spot doesn’t offer more details about the movie’s premise, but it does feature some new footage. In fact, we see a bit more of the movie’s masked villain, Taskmaster, in action. And this time, he appears to steal a move directly out of Steve Rogers’ playbook.

While the identity of the man under the mask remains somewhat of a mystery for the time being, we’ve now known for a long time now that Taskmaster is the main villain in Black Widow. Plus, the movie’s last trailer confirmed the supervillain would have his comic book abilities, which allow him to copy the fighting styles and moves of anyone he sets his sights on. Already, we’ve seen him replicating Black Widow’s move to the letter; he also appears to be as efficient with a bow and arrow as Hawkeye, and his use of a shield seems to be lifted straight from Captain America himself.

Now, thanks to the film’s Super Bowl trailer, we have confirmation that Taskmaster is copying his use of a shield from Steve Rogers because he has just stolen one of the Sentinel of Liberty’s signature moves.

In the Super Bowl spot, we can see Taskmaster in what appears to be the same fight against the Red Guardian we have seen in the film’s first trailer. There, his shield is on the floor, but he kicks it with his foot, to grab right onto his arm. The slick move is in fact nearly identical to one Steve Rogers performs in Captain America: The Winter Soldier.

As fans will recall, in the Joe and Anthony Russo-directed sequel, Captain America engaged S.H.I.E.L.D.’s STRIKE team in a brutal fight in a locked elevator. Though the unit tried their best, Steve knocked them all down and, once the confrontation was done, he reclaimed his shield by kicking it upwards onto his arm.

This is exactly the move Taskmaster replicates in Black Widow, during his fight against the Red Guardian. If anything, this further confirms the villain’s superpowers will be properly adapted to the big screen in the Marvel Cinematic Universe. What’s more, even though he isn’t slated to appear in the film, this keeps the presence of Steve Rogers alive in the MCU. Better yet, with Taskmaster gearing up for a fight against Red Guardian, Russia’s answer to Captain America, Black Widow just set the stage for a duel between captains… of a sort, at least.

Directed by Cate Shortland, Black Widow stars Scarlett Johansson as Natasha, Florence Pugh stars as Yelena, David Harbour as Alexei aka The Red Guardian and Rachel Weisz as Melina. The film opens on May 1, 2020.