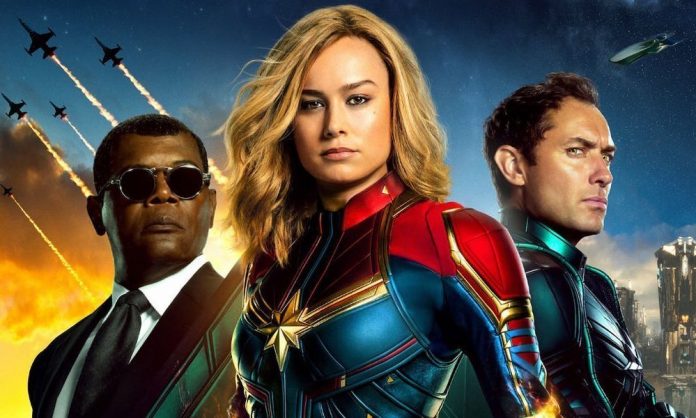 Following a press screening, the first reactions to Marvel Studios’ Captain Marvel are rolling in. Overwhelmingly positive, the responses call the film surprising in all the right ways, defying expectation and bursting with fun and laughter.

It’s taken the Marvel Cinematic Universe 20 films before they finally released their first female-led standalone movie. And, though it’s no doubt been a long time coming, critics are finally tuning in to to see whether or not the long delay has been worth their wait. Between the Captain Marvel’s non-linear origin story makeup, serious secrecy shrouding the identity of the film’s villain, and the unexpected ’90s setting, the intrigue surrounding this film was palpable. Now, near the end of the MCU’s Phase 3, Captain Marvel has finally arrived.

According to critics, Captain Marvel swings for the fences and makes some ambitious choices, even as it captures the atmosphere of its ’90s setting. What’s more, Carol Danvers herself Brie Larson “literally shines” and brings “sass, strength and energy” to the role. Ben Mendelsohn, who has hardly appeared in the trailers to date, earns a lot of praise for his scene-stealing portrayal of Skrull leader Talos. Carol’s feline companion Goose also looks to be winning hearts.

As of right now, the film is slated for a domestic opening of $120 million, a $20 million increase from the previous tracking. Even with the previous $100 million estimates, Captain Marvel would overtake several of its Marvel Studios brethren. That would put it ahead of Ant-Man and The Wasp($75 million), Doctor Strange ($85 million), Thor: The Dark World ($85 million), Guardians of the Galaxy ($94 million), Captain America: The Winter Soldier ($95 million), and Iron Man ($98 million).

If the $120 million number holds, that would put it into another bracket, overtaking Spider-Man: Homecoming on opening weekend, which sits at $117 million and Thor: Ragnarok which also sits at $117 million.Part of Captain Marvel‘s success will rely on word of mouth, of course, so hit the next slide to check out what people are saying about Marvel Studios’ next big deal.