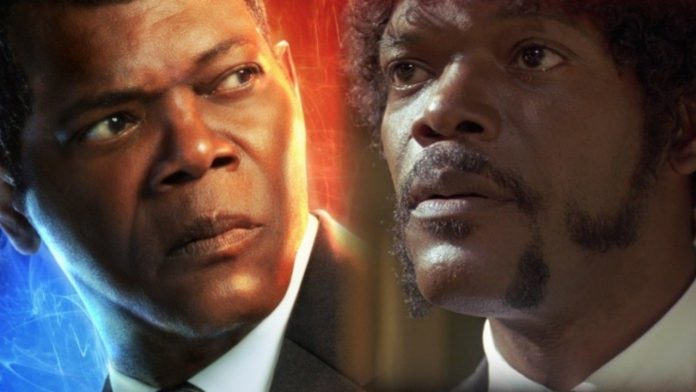 On Twitter, Jeff Rothman pointed out two clear references to Pulp Fiction. Firstly, fans can see Ben Mendelsohn’s Talos slurping a soda in what appears to be a homage to the scene where Jackson’s Jules Winnfield guzzles a soda to wash down a bite of a Big Kahuna Burger.

Rothman spotted another Pulp Fiction similarity when Fury and Phil Coulson (Clark Gregg) are riding together in dark suits. While that alone isn’t too remarkable, the way the scene is framed mirrors the famous Pulp Fictiondriving scenes where Jackson’s Jules and John Travolta’s Vincent Vega discussed the merits of European McDonald’s.

Yet another homage comes when — spoilers — a Happy Days lunchbox is opened to reveal the blue glow of the extraterrestrial Tesseract, a play on the golden glow of the Pulp Fiction briefcase, the contents of which are never revealed.

Captain Marvel had plenty of other ’90s references too. Danvers crashes into a Blockbuster Video store, Stan Lee is seen reading the script for his cameo in Kevin Smith’s Mallrats, and Captain Marvel uses AltaVista as a search engine. Captain Marvel‘s soundtrack is also a trip down memory lane with notable songs from ’90 favorites like Garbage, TLC, Nirvana and No Doubt. Given the prominence of Pulp Fiction in the ’90s film canon, it’s not surprising that the MCU film features references to it as well.