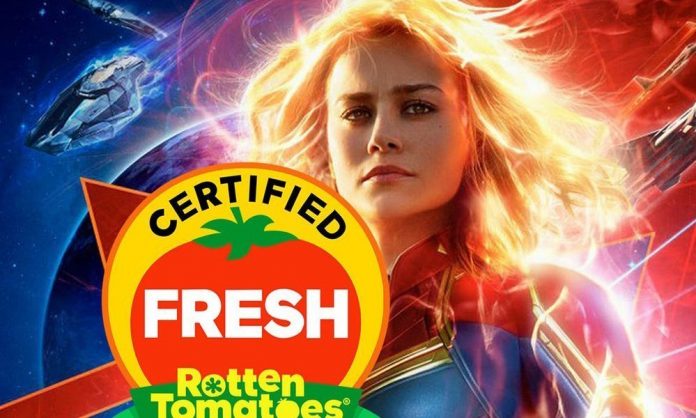 With Captain Marvel opening in theaters in just a few days, the reviews for the Marvel Studios film have arrived and with them, the film’s official Rotten Tomatoes score — and the review aggregate site is declaring Captain Marvel as Certified Fresh.

As shared to Twitter Tuesday afternoon, Captain Marvel is sitting at 87 percent on their Tomatometer. Now, since that tweet was published, a few more reviews have rolled in causing a slight shift down to 83 percent at the time of this article’s writing, but it’s still enough to keep the film Fresh. Out of 114 critical reviews on the site, 95 of them give the film a positive review.

Per Rotten Tomatoes, Captain Marvel has been well-received by critics thus far. The Washington Post’s Ann Hornaday emphasized Larson’s lead performance, stating “As shaky and unfocused as “Captain Marvel” often seems, it manages to reach its destination with confidence. In the end, Larson sticks the landing, albeit with something more muted than absolute triumph.”Meanwhile, The Arizona Republic’s Barbara VanDenburgh found value in Captain Marvel’s overall aesthetic: “Its mid-’90s setting gives the film retro flair, and its girl-power soundtrack, blasting Garbage and Hole, will win over any ’90s girl’s heart.” By contrast, IndieWire’s David Ehrlich wasn’t impressed: “Neither a blast from the past, nor an inspiring glimpse into the future, at the end of the day it’s just another Marvel movie. And not a particularly good one, at that.”

Now, with genuine reviews from people who have actually seen the film arriving, it seems that the trolls were just that: trolls. Captain Marvel‘s current Rotten Tomatoes score puts it on par with Guardians of the Galaxy Vol. 2 which has an 84-percent rating and ahead of Captain America: The First Avenger‘s 80-percent rating. It also gets close to Avengers: Infinity War‘s 85-percent meaning that the first female-led Marvel Studios film appears to be holding its own.