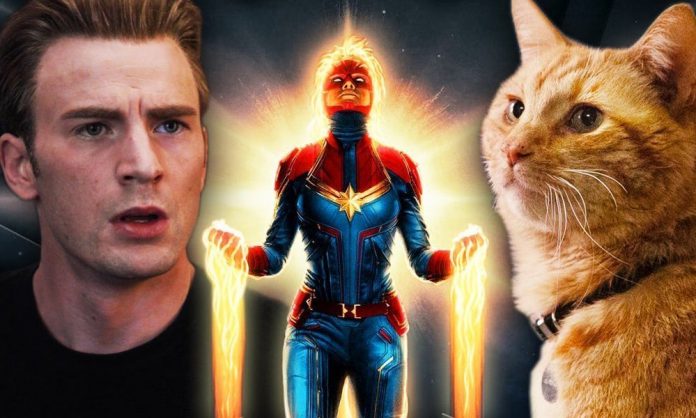 Captain Marvel is a fantastic addition to the Marvel Cinematic Universe of movies, with great performances, fantastic action and one of the best stories of any MCU movie so far. As expected, it also had two post-credits scenes. The first will probably get you even more excited about Avengers: Endgame than you already are, and the second is more of a humorous bookend to the film.

The mid-credits stinger is what the franchise faithful have been waiting for, as it follows up on the Avengers: Infinity War post-credits sequence in which Nick Fury (Samuel L. Jackson) sends a distress call on a modified pager emblazoned with Captain Marvel’s starburst logo.

The scene opens on the device in a special containment unit at the New Avengers Facility in New York. Captain America (Chris Evans) and Black Widow (Scarlett Johansson) survey the aftermath of the “Decimation,” the finger-snap by Thanos that wiped out half of all life in the universe. As Cap assesses the body count, he says, “This is a nightmare,” to which Black Widow replies, “I’ve had better nightmares.”

James Rhodes (Don Cheadle) interrupts to inform them the pager has stopped sending its signal. As they discuss rebooting it with Bruce Banner (Mark Ruffalo), Widow makes it clear she wants to know who’s on the receiving end — just as Captain Marvel appears out of thin air behind the shocked group. Her entrance is short but sweet as she asks, “Where’s Fury?” before the screen cuts to black, and a line of text appears, reading: “Captain Marvel Will Return in Avengers: Endgame.”

It’s a landmark moment, because now the team truly as Earth’s Mightiest Hero among its ranks. We’re not sure how much time has passed wherever Carol went, but she looks relatively the same, apart for slightly longer hair, and her suit now having gold shoulder pads.

The second scene fills in the blanks between the 1990s-set Captain Marveland 2012’s The Avengers, while also wrapping up some loose threads from Captain America: The First Avenger. The action returns to Fury’s S.H.I.E.L.D. office, where Goose, revealed to be an Flerken, not a cat, jumps onto the desk. In Captain Marvel, Goose swallowed the Tesseract to keep it from the vindictive Kree, and we now see him cough it up like a hairball.

Goose leaves the saliva-covered containment vessel for the Space Stone on Fury’s desk for him to find, setting up S.H.I.E.L.D.’s experiments at the Project P.E.G.A.S.U.S. facility before Loki (disguised as Dr. Erik Selvig) arrived to claim cube for Thanos. But this sequence also addresses the end of The First Avenger, in which Howard Stark retrieved the Tesseract from the icy waters after Captain America’s battle with Red Skull and eventual plane crash.

Many assumed Stark immediately began to use the Tesseract to conduct S.H.I.E.L.D.’s experiments, but Captain Marvel reveals it was first tested at Project P.E.G.A.S.U.S. It’s there that Mar-Vell (Annette Bening), disguised as Dr. Wendy Lawson, conducted experiments of her own, which ultimately led to the fight with Yon-Rogg (Jude Law), and Carol becoming imbued with the powers of the Infinity Stone. Alas, Goose’s stomach was the only containment unit available to carry the Tesseract from Mar-Vell’s secret lab in outer space and back to Earth.