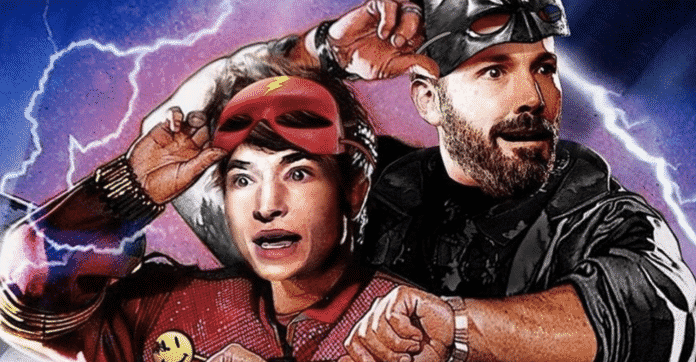 The DCEU’s Batman and Flash star in this hilarious Back to the Future remake poster. Both Ben Affleck and Ezra Miller made their DCEU debuts in 2016’s Batman v Superman: Dawn of Justice, though Miller’s part amounted to little more than a quick cameo. Affleck played Bruce Wayne/Batman in the film, while Miller took on the role of speedster Barry Allen/the Flash. The two would later join forces in Justice League along with the rest of the beloved comic book team. Since then, both actors have seen their DCEU futures get shuffled around a considerable amount.

Miller will return as Barry in The Flash, the long-awaited solo movie that was once scheduled for 2018. The Flash is currently slated for release in June 2022, and Andy Muschietti (It) will direct the film, which will draw inspiration from the famous Flashpoint storyline from the comics. Flashpoint sees Barry go back in time to save his mother from being murdered, but in doing so, he alters reality in drastic ways. The Flash is expected to throw open the multiverse and feature different iterations of certain DC characters. One of those will be Affleck’s Batman, as was announced just last week.

The news of Affleck’s DCEU return was met with much excitement from fans and has inspired a whole slew of new works. This Back to the Future piece was created by Samuel Chevé and shared by SYFY WIRE. It hilariously casts Miller’s Flash and Affleck’s Batman as Marty McFly and Doc Brown, poking fun at the time travel element expected to factor into The Flash. Check it out down below.

Muschietti said Affleck’s Batman would play a key role in the emotional core of The Flash, with Barry and Bruce’s relationship becoming a vital part of the story. Perhaps their relationship actually won’t be that dissimilar from Marty and Doc Brown’s, though one can probably expect Bruce to be a bit more put together than Doc Brown. Back to the Future comparisons aside, having Bruce connect with Barry in The Flash should provide some exciting depths to the film, and fans certainly seem excited at the prospect of seeing the two join forces once again.

Affleck’s return comes as a special surprise entirely on its own, because Affleck previously seemed to be done with the DCEU. While it still seems unlikely that he will lead another Batman movie, clearly anything can happen. Affleck’s role in The Flash provides a new opportunity to dig into his version of Batman in a way that hasn’t been done yet in the DCEU, so hopefully this won’t be wasted. Barry could use a mentor, and Bruce just might fit the bill.