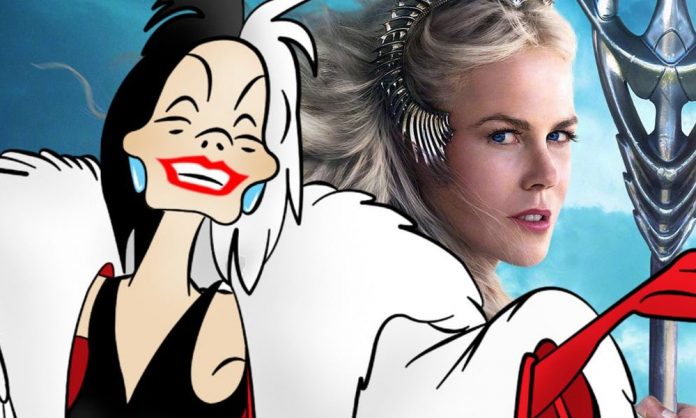 Nicole Kidman is reportedly the top pick to play the villain in Disney’s Cruella, a live-action movie starring Emma Stone as a young Cruella De Vil.

The Hashtag Show reported on Friday that Disney is keen on casting Nicole Kidman, who recently starred in WB and DC’s Aquaman, to play the role of Baroness. This character would act as the antagonist to Cruella in the film, and is vital to the character’s turn to evil.

While Kidman seems to he the front-runner, Disney is apparently also looking at Emma Thompson, Charlize Theron, Julianne Moore, and Demi Moore for the role.

In addition to the updated casting information, THS also shared a brief synopsis for Cruella, which you can find below.

Estella (Cruella De Vil) lives on the streets of 1970’s London with other hoodlums, where we learn the real origins behind Estella’s hatred of Dalmatians.

This Cruella movie will mark the second time a classic Disney villain is getting their own live-action backstory. Angelina Jolie brought the iconic villain from Sleeping Beauty to life in 2014’s Maleficent. Jolie will reprise the role in a sequel, Maleficent: Mistress of Evil, later this year.