Home Movie News Doc Ock Has An Armful Of Tom Holland In New ‘Spider-Man: No... 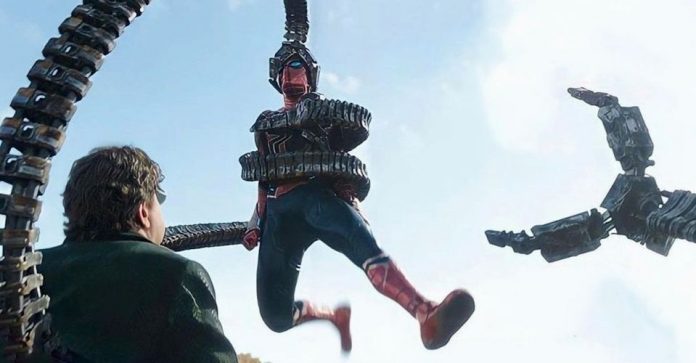 Doctor Octopus catches Tom Holland’s Spider-Man in new Spider-Man: No Way Home images. Dr. Otto Octavius, better known as Doc Ock, is one of the oldest and fiercest foes of Spider-Man. Over the many comic adaptations, he and the Web Slinger have fought numerous times in their decades-old rivalry. Now, the doctor is returning to the big screen in Spider-Man: No Way Home, with Alfred Molina reprising his iconic role.

Molina first portrayed Doc Ock nearly 17 years ago in Spider-Man 2, which starred Tobey Maguire as Spidey in Sam Raimi’s 2004 adaption. Raimi’s follow-up Spider-Man film proved to be an exemplary superhero movie with critics praising its emotional weight and visual effects. Additionally, critics praised Molina’s performance as Doc Ock, which would go on to be considered one of the best portrayals of a Spider-Man villain on the big screen. At the end of Raimi’s movie, Dr. Octavius commands his sentient tentacles to destroy the nuclear reactor threatening New York City and ends up sacrificing himself in the process. However, given the trailer for No Way Home, it seems Doc Ock may not be gone for good.

Everything CBM hasposted new images in a Twitter post that shows Doctor Octopus catching Holland’s Spider-Man in No Way Home. The magazine images show Spider-Man caught in Doc Ock’s tentacle arms struggling to get free. The image is accompanied by large text that reads, “Tangled up.” The caption below that also reads, “Peter Parker finds himself fighting iconic villains from past lives.” Click the link below to view the images of Spider-Man caught by Doc Ock in No Way Home.

Given the time span from Spider-Man 2 to No Way Home, the 68-year-old Molina appears much younger in the images than one would expect. The previous No Way Home trailer coupled with the images above hint at the film giving the actor a digital de-aging effect. It appears Doc Ock’s tentacles won’t be the only CGI the character is receiving. Additionally, the film also previously teased the fight against Doctor Octopus and Spider-Man in images that show the characters battling on a busy New York highway. Doc Ock uses his tentacles to lift a car in an effort to throw it at a fleeing Spider-Man. Those images, and the images above, harken back to what made Spider-Man 2 a great superhero movie: the visual effects of the two rivals’ battles.

Holland has previously gone on record saying that he views Spider-Man: No Way Home as the end of the franchise. Owing to the tagline above of Spider-Man fighting villains from the past, it only makes sense to include Molina’s iconic Doctor Octopus in the final movie. With Spider-Man being caught in the Doc’s tentacles numerous times in Spider-Man 2, seeing the superhero in the images above bring back a lot of nostalgia for fans. Hopefully, the Web Slinger can escape the tentacles and defeat Doc Ock to save the city this time around.