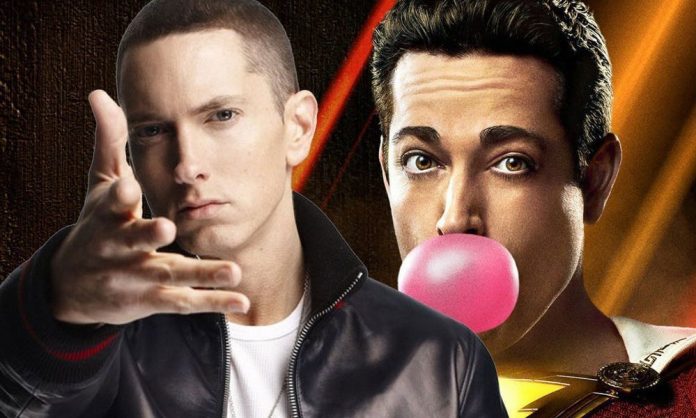 Warner Bros. and DC dropped a brand new trailer for the upcoming Shazam! movie on Monday, and nearly everyone online is showing the ad some love. Everyone including Slim Shady himself, Eminem.

Taking it to his official Twitter account, Eminem shared Shazam! second trailer with the caption “My name is, who????” – a direct reference to the use of his song “My Name Is” on the trailer. Fans on the comment section were thrilled to see the rapper react to the video, most of them pointing out how he’s been dabbling in comic book films and TV shows recently. Check out Eminem’s tweet below:

Marshall Mathers has been on a roll with comic book properties as of late. Back in October, Shady recorded the title track for Sony’s Venom soundtrack, leading into the release of his new album. Earlier this year, he was a vocal supporter of Marvel’s The Punisher TV series, tweeting out his disappointment in Netflix following the show’s cancellation.

The use of “My Name Is” in Shazam!‘s second trailer was a great move from Warner Bros. and DC considering that Batson transforms into his superhero persona by uttering the magical word: Shazam. While fans know that he’ll eventually decide on his name, the promo clip featured Freddy (Jack Dylan Grazer) giving him the hilarious name, “Captain Sparkle Fingers” which made for a funny sequence. And since Eminem’s song is already quite a catchy tune, associating it with the movie is a great marketing way to keep fans reminded that it’s hitting theaters in four weeks.