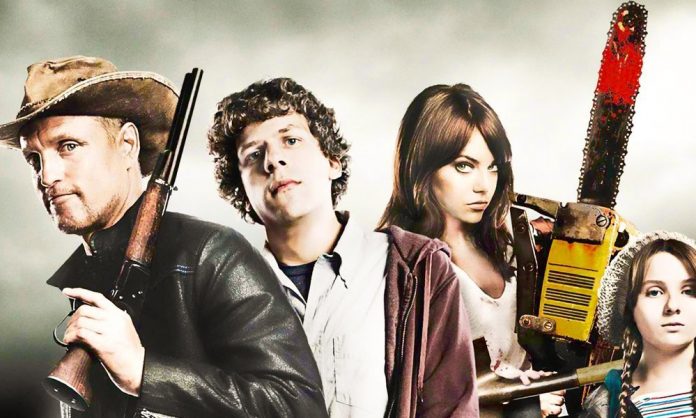 The first look at Zombieland 2, officially titled Zombieland: Double Tap has been revealed.

The Zombieland sequel returns with its entire original cast, a decade after the first film was released. Now, Sony has allowed the first look at the cast members reuniting to be released, as Tallahassee (Woody Harrelson), Columbus (Jesse Eisenberg), Wichita (Emma Stone), and Little Rock (Abigail Breslin) have all evolved. Not only has the cast grown up, but their weapon set has also grown, having spent what might actually be 10 years in the zombie apocalypse.

Check out the poster below, which is a play on the popular #10YearChallenge meme, featuring the original cast striking similar poses to the 2009 poster. Adorned above the casts’ heads is a banner that reads Zombieland: Double Tap.

Zombieland: Double Tap will see the surviving characters from the first film traverse a zombie-infested United States, with the makeshift family encountering new and evolved forms of the undead as they make their way to the East Coast.Directed by Ruben Fleischer from a script by Rhett Reese and Paul Wernick, Zombieland: Double Tap stars Jesse Eisenberg, Emma Stone, Abigail Breslin and Woody Harrelson. The film is scheduled to be released on October 11.