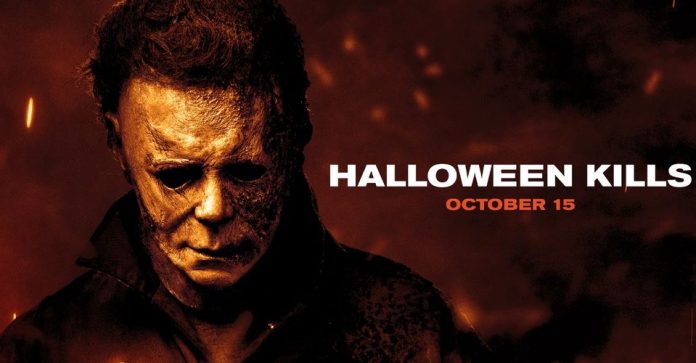 Michael Myers emerges from the Strode house fire in a new Dolby poster for Halloween Kills. After being delayed from 2020 due to the coronavirus pandemic, the next chapter in the Halloween franchise will arrive in just a couple of weeks. Directed by David Gordon Green, Halloween Kills is a direct sequel to the 2018 movie that revamped the entire franchise, and it will pave the way for what could be its final installment, 2022’s Halloween Ends. The movie will debut in theaters and on Peacock.

Picking up right where the previous movie left off, Halloween Kills will find scream queen Laurie Strode (Jamie Lee Curtis) and her family (Judy Greer and Andi Matichak) basking in the knowledge that they dispatched Michael once and for all. Unfortunately, they didn’t quite finish the job, and Michael soon frees himself from the burning of remains of Laurie’s house with an eye on returning to Haddonfield for another killing spree. Halloween Kills promises to be the franchise’s bloodiest installment yet, and it just might end up unmasking Michael once and for all.

As of Friday, October 1, tickets for Halloween Kills are on sale. To celebrate, Dolby Cinema has released an exclusive poster for the movie. It features Michael, mask still on, standing among the flames of the Strode house. Clutched in his hand is his signature kitchen knife, suggesting everyone would be smart to run away as fast as they can. Check it out below, then be sure to purchase tickets for a Dolby Cinema.

Though it really looked like the fire at the end of 2018’s Halloween would finally be enough to take care of Michael, longtime fans of the franchise likely knew better. Michael has evaded death time and time again, partially thanks to endless reboots but also because he’s the boogeyman. Though Halloween Ends might finally see fit to put an end to his reign of terror, this year’s movie will probably see him survive everything the residents of Haddonfield throw at him.

Halloween Kills is also notable because of the number of returning characters it features. In addition to Laurie and her family, the movie will bring back figures from past installments, like Tommy Doyle (Anthony Michael Hall) and Lindsey Wallace (Kyle Richards). Fans of the franchise won’t want to miss Halloween Kills, which will arrive just in time for the titular holiday. For those who want maximum scares, the theater will surely be the best place, though Peacock offers an opportunity for others who are uncertain about going out in public. In other words, there’s no excuse to miss out on Michael’s latest exploits.