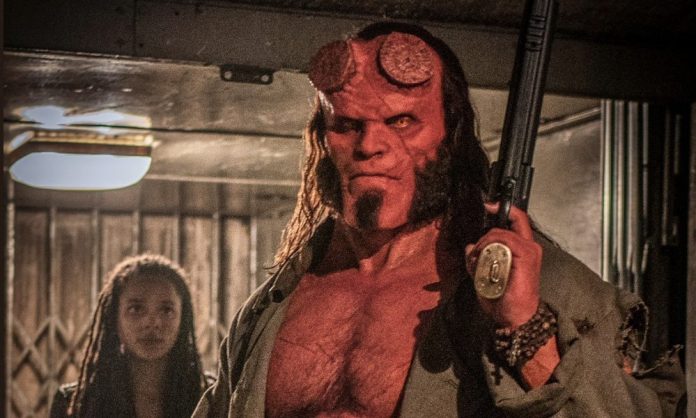 As we get closer to Neil Marshall’s Hellboy storming into theaters on April 12, the film’s official Twitter account has just released four new photos from the upcoming reboot.

The images place David Harbour in the spotlight as he takes over duty from Ron Perlman. We see him brazenly kicking back with no respect for authority at the Bureau for Paranormal Research and Defense, with monitors on the back clearly detailing an impending apocalypse. There is also a shot of Hellboy getting ready for war in the British countryside to fight Giants.

There’s also an ominous shot of him holding his trusty gun, the Samaritan. And last but certainly not least, we have an epic visual of him gripping his flaming sword, rocking his large horns and a crown of fire.

When asked about the character, Harbour said the following: “He has a heart that’s really good and with a lot of this crusted-over stuff. What I’m dealing with in Hellboy is a lot different, bigger in a certain way. It’s very Shakespearean. It’s demons and witches and stuff like that. But it has a similar core to a dude who’s trapped in horrible circumstances who’s just trying to be a good guy.”