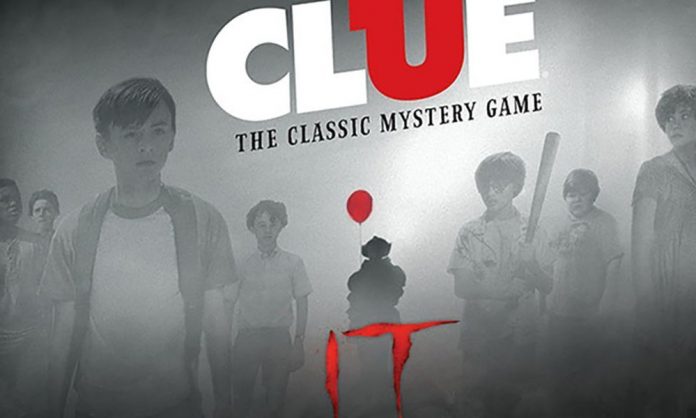 Pennywise is coming to terrorize your game night: IT-themed Clue and Monopoly board games will be available later this year.

News of IT’s latest incarnations come to us courtesy of custom game makers The OP, who will be releasing three different IT-themed games: IT Monopoly, IT Clue and the first ever signature game based on the wildly successful horror novel turned film, IT: Evil Below. While both the Monopoly version of IT, as well as IT: Evil Below, aren’t due to be released until some time later this year, the Clue-themed version of IT is set to be released this month.

Per press release, “Based on the hit 2017 Warner Bros. Pictures’ film, CLUE takes the classic mystery game even further into shrouded chaos as Bill Denbrough and his friends attempt to determine Pennywise’s Plan. Travel between the House on Neibolt Street, the Synagogue, Derry Public Library, and more to identify various items used to lure the town’s youth, while avoiding Red Balloons that will end the operation before the menacing killer’s Plan can be uncovered. CLUE: IT will be available this March.

“Also inspired by the highly-acclaimed film, MONOPOLY: IT makes buying, selling, and trading places in and around Derry, Maine the key to winning this uncanny twist of ‘the Landlord’s Game.’ Using tokens of iconic items such as an Inhaler, Paper Boat, and Bicycle, players can draw Encounters and Phenomena cards as they build Suburban Houses and Apartment Buildings on locations like Pennywise’s Cistern and the Derry Sewers. Monopoly: IT will be available later this year.

The idea of licensing IT as a variety of board games (both classic and new) is a great one, especially given the ever-persistent popularity of the story’s villain, Pennywise. Something about the crazed, shape-shifting clown has really hit a note with people over the years. That sort of timeless popularity fits perfectly with the likes of classic games such as Clue and Monopoly and, of course, leaves plenty of room for new forms of gaming like It: Evil Below. It’s unfortunate that an IT video game has yet to materialize, however, but if the upcoming second chapter of the IT film series continues to build on the IP’s existing appeal, then it may not be much longer before a video game version of IT is available. Until then, the board games should suffice.

(Will Smith Not Returning for ‘Suicide Squad’ Sequel)