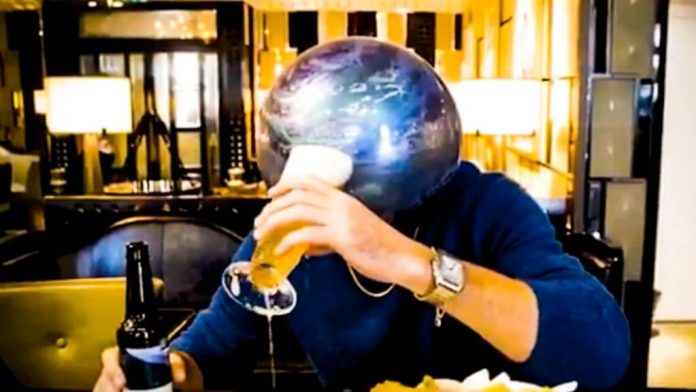 It can’t be easy living with Mysterio’s — played by Jake Gyllenhaal — fishbowl helmet.

Wearing the signature fishbowl is not without its downsides. On Instagram, Gyllenhaal posted a humorous video showing that wearing the helmet has its own set of challenges. Watch the video below.

In the video, Gyllenhaal, wearing Mysterio’s fishbowl, sits in a restaurant. As he attempts to eat plate of fish n’ chips, the helmet proves to be an impenetrable barrier for the super-villain, who clearly just wants to kick back and relax. Worse still, he tries to pour himself a beer in a glass, but he can’t even see what he’s doing.

The video has garnered quite a lot of love on social media, with Far From Home director Jon Watts even joking that it should have been the film’s post-credits scene. As amusing as the video is, Gyllenhaal revealed in a recent interview that his behind-the-scenes prep for the “fishbowl helmet” was just as awkward.

“I was a little worried about the fish head thing, but ultimately, the suit is sick, and that was that,” Gyllenhaal explained earlier this month. “After I learned how to fly, one of the things that I wanted to make sure of was that I could fly with the actual fishbowl on my head, so Marvel gave me one, and then also I filled it with smoke and would fly around with it on my head and it worked. Then I was ready to make the movie.”

Spider-Man: Far From Home arrives in theaters on July 2nd.