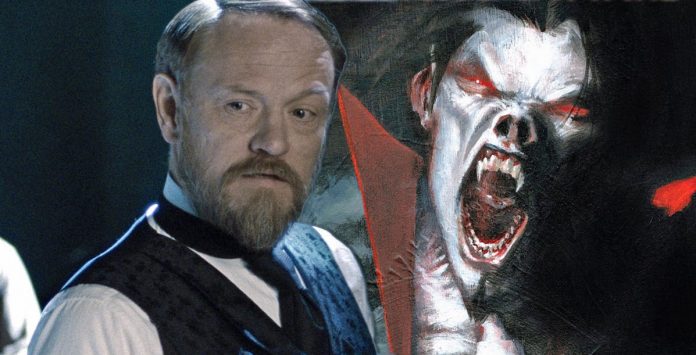 The web of Sony’s Spider-Villian universe continues to grow, with Jared Harris officially joining the cast of Morbius. Harris, who appeared in Mad Men as the financial officer Lane Pryce, has signed onto the film. His role has not been revealed, hinting that it might be one of importance to the movie.

Son of renowned, Oscar-nominated actor, Richard Harris, the British-born actor has amassed a wide and eclectic range of roles of his own over the last few decades. Most notably, he starred as Lane Pryce in AMC’s Mad Men and as King George VI in Netflix’s The Crown. He has also appeared on the big screen, with turns in The Man from U.N.C.L.E and the recent Poltergeist remake. Harris will be the second Jared on the cast, with Suicide Squad‘s Jared Leto set to play the titular role.

Former Doctor Who  star Matt Smith is also confirmed to be involved in the film in an undisclosed role, and Adria Arjona will portray Martine Bancroft, who could serve as Morbius’ vampiric love interest.

In the comics, Morbius was a scientist who is accidentally transformed into a creature similar to a vampire. Although he was initially portrayed as a Spider-Man villain, Morbius has switched between moral alignments over the years and been both a hero and a threat to the Marvel Universe. Currently, he’s helping out the Avengers and the Agents of Wakanda as part of Marvel’s ongoing vampire civil war.

Directed by Daniel Espinosa (Life) from a script written by Burk Sharpless and Matt Sazama (Lost in Space), Sony’s Morbius stars Jared Leto as the titular character and Adria Arjona as Martine Bancroft. The film will hit theaters July. 31, 2020.