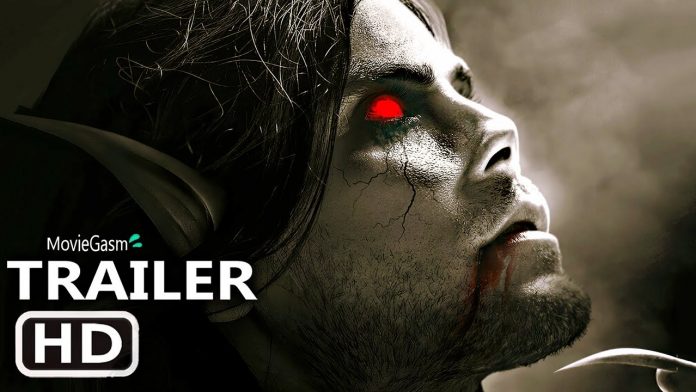 The next trailer for Sony Pictures’ Morbius will be here sooner than you think.

MovieGasm debuted a new Morbius featurette featuring a look behind the scenes of the Marvel Cinematic Universe-adjacent movie. The outlet also noted that the next trailer arrives on Tuesday, Nov. 2.

Morbius follows Michael Morbius (Jared Leto), a doctor who becomes a vampire after attempting to cure himself of a rare blood disease. Created by Roy Thomas and Gil Kane, the character debuted in 1971’s Amazing Spider-Man #101. While originally a Spidey villain, Morbius has since gone on to become an antihero in his own right.

The film was originally slated to hit theaters July 10, 2020, seven months after the first Morbius trailer debuted. Shortly thereafter, it was bumped to July 31. When the COVID-19 pandemic began to take a toll on Hollywood, Morbius was delayed yet again, this time to March 19, 2021, and then Oct. 8, 2021. Most recently, it was pushed from October 2021 to January 2022.

The aforementioned first Morbius trailer took many fans aback thanks to the appearance of Michael Keaton’s Adrian Toomes, aka The Vulture, leading many to believe the Sony film would connect to the Marvel Cinematic Universe. “I’m nodding like I know what the fuck they’re talking about,” Keaton recently explained while discussing the Morbius/Spider-Man: Homecoming connection. “I go, ‘Uh-huh.’ And I’m thinking, ‘You may as well be explaining quantum physics right now to me. All I know is I just know my guy. And I know the basics.’ They said, ‘You don’t know what we’re talking about, do you?’ I said, ‘No, I don’t, no idea what you’re talking about.'”

These comments from Keaton were prior to the release of Venom: Let There Be Carnage, which ended with Tom Hardy’s Eddie Brock/Venom seemingly landing in the Marvel Cinematic Universe proper. However, Morbius director Daniel Espinosa previously appeared to let it slip that Venom could join Vulture in Morbius, saying, “It usually feels strange before the day begins, when you look at the schedule and stand on set. When you walk around there, the recording looks just like a Swedish production, but then you look at the schedule and read names like Michael Keaton, Jared Leto and Tom Hardy.”