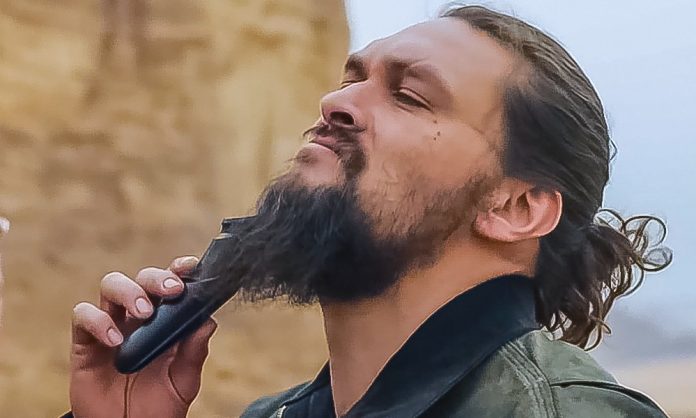 Jason Momoa shaves off his beard for the first time since 2012.

Out in the open wilderness, presumably filming ‘The Dune’ reboot, the actor took an electric clipper to his beard. With each chunk he shaved, he bid farewell to a character he played while rocking it.

The actor quickly revealed that he wasn’t getting rid of his whiskers for nothing.

Momoa stripped his face of all its hair and stubble for a good cause. He is launching a line of aluminum cans of water that are completely recyclable. He wants to reduce plastic to help preserve the environment.

“Most importantly, I just want to do this to bring awareness [to the fact] that plastics are killing our planet, and I think I have a solution,” Momoa explained as he continued shaving his beard. “There’s only one thing that can help save our planet, as long as we recycle, and that’s aluminum.”

“About 75 percent of all aluminum that’s ever been used is still in circulation today. It’s 100 percent recyclable. So you drink the can, and in about 60 days, it’ll be back -100 percent. Infinitely recyclable,” said Momoa. “About, over the last two months, I really kicked it into gear. I wanted to make my own water … so I had a product that I could take out and give to the world, and that I could take to other companies. Hopefully, they will do the same … It’s just water, but I feel good about it.”

As Momoa cleaned up the last remaining hairs on his face, he gave a little shoutout to his superhero character to drive his point home: “Aquaman’s trying to do the best he can — for my kids, for your kids, for the world. Clean up the oceans, clean up the land. Love you, guys.”

Jason Momoa’s activism blew away more fans than his new look. At the end of the day, hair does grow back.