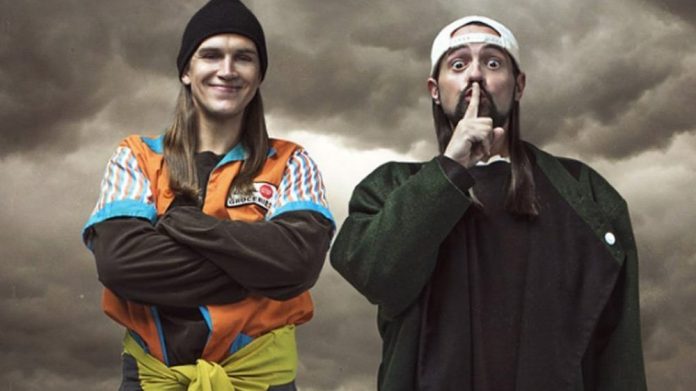 “I’m bringing the Jay and Silent Bob trailer to Comic-Con and these fine folks are to blame! Saban Films picked trailer house AV Squad to chop my 1 hour and 45 min epic into a 2 min and 30 seconds red band preview that represents the fun and feels of Jay and Silent Bob Reboot!” writer-director Smith wrote on Facebook. “And the team at AV Squad did not disappoint!”

In his post, Smith shared two photos of himself with the person who edited the trailer. “So the guy in the Jason Mewes cosplay was the same guy who cut the Jay and Silent Bob Reboot trailer! How poetic is that?” he said. “It’s gotta be a good sign we got the right man for the job! You’ll find out in Hall H!”

Given his massive love for pop culture and especially comic book culture, Smith is a natural to have a presence at Comic-Con. Fans of Smith and his Jay and Silent Bob characters will no doubt be thrilled to see the filmmaker break out the first trailer for Jay and Silent Bob Reboot at the convention.

Jay and Silent Bob Reboot is expected to be released in theaters later this year. Comic-Con International in San Diego runs Thursday, July 18 through Sunday, July 21.