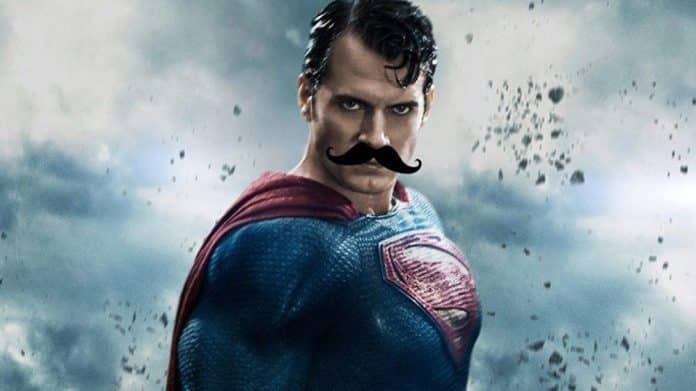 Fans get their best look at Superman with a mustache in a brand new Justice League image.

While Justice League was filming, Cavill — who reprised his role as Superman — was sporting a mustache, which he had grown out for his role in Paramount’s Mission: Impossible – Fallout. Cavill’s contract reportedly prevented him from shaving the facial hair. And while Fallout director Christopher McQuarrie tried to cut a deal that would allow Cavill to shave, Paramount ultimately nixed the idea. As such, the Justice League team was forced to use CGI to cover up Superman’s mustache.

At least one behind-the-scenes image of Superman with his mustache has previously surfaced online. And now, another one has been posted to the r/DC_Cinematic subreddit. The image sees an airborne, unshaven Supes looking towards the ground.

Frankly, Cavill looks fine with the mustache and while keeping it would’ve been a significant deviation from what fans are used to in terms of how Superman should look, it might’ve been a better choice considering what ended in Justice League. At least this doesn’t make him look like he had a rubbery-looking upper lip most of the time he was on screen in the movie, which coincidentally was also proof that a significant part of his arc was changed last minute during reshoots. This is the public’s second look at the actor in the Man of Steel costume pre-CGI-removed facial hair, and it’s curious if there’s more images to come down the road.