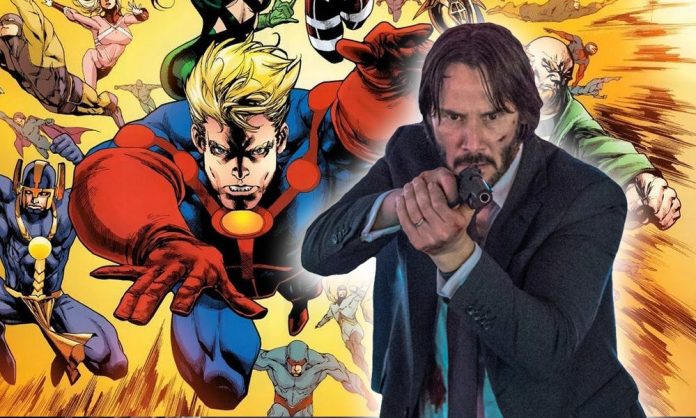 A new batch of Marvel Studios rumors has hit the net offering that Keanu Reeves has been cast in the upcoming Eternals movie.

According to MCU Cosmic, while negotiations are underway, Reeves has not yet signed on to the project, with talks still in the early stages. If Reeves were to sign on the dotted line, he would join a cast that already consists of Angelina Jolie as Sersi, Richard Madden as Ikaris, as well as Kumail Nanjianiand Ma Dong-seok in mysterious roles. And there are still plenty of roles yet to be cast as Marvel Studios is still said to be eyeing an out Asian actor for a lead role, as well as the film reportedly set to cast at least two more lead female roles with “Piper” and “Karen.”

The Eternals is one of the more mysterious projects in the pipeline from Marvel Studios, and is one of the few confirmed films we actually know is coming out. And producer Kevin Feige is very excited to see it happen, as he explained to Bionic Buzz last year.

“You’re reaction about not being familiar with the Eternals is perfect, because most people weren’t familiar with Guardians [of the Galaxy] and believe it or not there were people that were not familiar with Avengers or with Iron Man,” Feige says. “So for us, its finding great stories whether people have heard of them or not and bring them to the big screen in as amazing a ways as we can.”

Filming on The Eternals is expected to begin later this year after Black Widow wraps production.

Directed by Chloé Zhao with a screenplay by Matthew and Ryan Firpo, The Eternals is expected to be released in theaters in 2020.