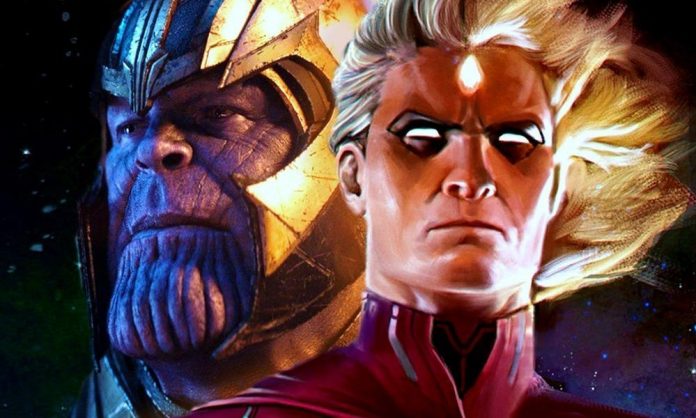 With Infinity War ending in the most outrageous fashion of any Marvel film, it’s hard for fans to look beyond Thanos to the future of the MCU. But there’s a theory that not only will Avengers: Endgame see Thanos defeated… it will finally lead to the birth of Adam Warlock.

To occasional Marvel fans, or perhaps even comic readers who know the old Adam Warlock better than the one in Marvel’s current comics, the character may seem completely unrelated to the events of Avengers: Endgame. But as fans everywhere spin theories as to how the Avengers can defeat Thanos and restore the universe, the comics have already dealt with the REAL problem: the Infinity Stones, just waiting to be claimed by the next wannabe tyrant. Unless our theory proves true, and Endgame follows the comics’ lead.

If it does, then, Thanos will be defeated, Vision will fulfill his purpose in a greater way than any fan thought possible, and the next phase of Marvel’s movie universe will begin with the birth of Adam Warlock–created exactly as he should be.

Infinity War sees Vision go through quite a bit, but we also learned that he and the Mind Stone were evolving. Thanos and his Black Order are coming for the Infinity Stones and Vision wants to remove and destroy the Mind Stone, in an effort to keep Thanos from achieving his goal. While in Wakanda and deciding whether or not taking the stone out of his head will kill him, Bruce Banner explains that there’s a good chance that Vision with survive. He explains.

“Your mind is made up of a complex construct of overlays. JARVIS, Ultron, Tony, me, the Stone. All of them mixed together, all of them learning from one another… if we take out the Stone, there’s still a whole lot of Vision left. Perhaps the best parts.”

With that being said, there have been more than a few theories that state Vision is taking on the Adam Warlock storyline for the MCU. However, this could also mean that Infinity Stones are able to be given to other characters to take on their soul, much like what Warlock did in the comics. Warlock has the Soul Stone embedded in his head and then collects the scattered stones to hand them out to the right souls, allowing them to, “lead their own individual lives. Write their own destinies.”

This could mean that the Infinity Stones going forth after Avengers: Endgame are all living entities while bringing Adam Warlock into the MCU. There are some problems with this theory. For one, the Russo Brothers claim that Warlock will not be in Endgame because they don’t want to do a direct adaptation of the comic book source material, which makes complete sense. However, a lot has changed, especially with Guardians of the Galaxy 3 being on hold.

It’s still just a theory, but it would be an awful waste if all the time spent exploring Vision’s union with the Mind Stone wasn’t leading to this kind of payoff, and if he was likewise denied the chance to repay his gift of life. Even if James Gunn isn’t making Guardians 3, he was expecting to when he introduced Adam as a tease after Guardians 2‘s credits. And Gunn was still making the Guardians 3 film that the Russos planned to be setting up, in some way, with the end of Avengers: Endgame.