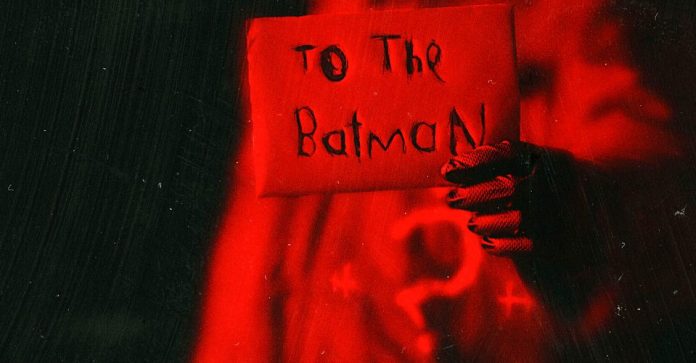 Warner Bros. has released a pair of moody posters for The Batman ahead of the film’s second trailer dropping at DC’s FanDome.

The first of these one-sheets shows Bruce Wayne/Batman (Robert Pattinson) standing alone by himself on a rainy night. Similarly, the second poster uses the same red-and-black color palette to highlight Edward Nashton/The Riddler (Paul Dano), who’s holding a sign reading “To the Batman.”

Created by Bill Finger and Dick Sprang, The Riddler first appeared in 1948’s Detective Comics #140 and has shown up in numerous live-action and animated Batman-related projects over the decades. However, unlike the earlier iterations of the character played by Frank Gorshin in 1966’s Batman: The Movie and Jim Carrey in 1995’s Batman Forever, Dano’s Riddler has a far less flashy costume and seems to hew closer to a real-world criminal like the Zodiac Killer. The first trailer for The Batman, which premiered at the 2020 FanDome, even opens with a grisly murder scene left behind by the character, his victim’s face covered in duct tape with a message scribbled on it: “No more lies.”

At the same time, the trailer shows The Batman‘s Riddler — like earlier iterations of the super-villain — can’t resist leaving a cryptic-yet-rhythmic riddle behind for the Dark Knight to decode, reading, “From your secret friend. Who? Haven’t a clue. Let’s play a game. Just me and you.” And in spite of rumors that Pattinson and co-writer/director Matt Reeves were pushing for an R rating, the fact that The Batman is getting playsets from LEGO (a company that doesn’t make toys based on R-rated properties) confirms the movie won’t be too graphic when it comes to depicting the Riddler’s crimes.

Early signs indicate WarnerMedia is pleased with The Batman, having already initiated development on a pair of HBO Max spinoff series centered around the Gotham City Police Department and Colin Farrell’s version of Oswald Cobblepot/Penguin. The actual film proved to be more challenging than expected to make after having to overcome multiple obstacles related to the ongoing coronavirus (COVID-19) pandemic, including Pattinson contracting the virus.

The Batman opens in theaters on March 4, 2022. Its new trailer drops during DC’s FanDome Oct. 16.