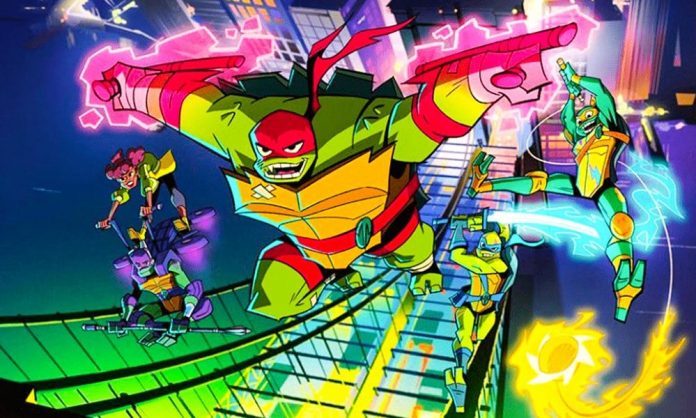 The Teenage Mutant Ninja Turtles are returning to movies for animated film on Netflix. The film will be based on the current series Rise of the Teenage Mutant Ninja Turtles, now airing on Nickelodeon. Rise of the TMNT is a popular cartoon that follows brothers Raph, Leo, Donnie, and Mikey, along with their friend April O’Neil, as they unlock the mystical secrets of New York City.

The announcement was revealed during a Tuesday morning earnings call and is part of a long-term plan to expand Nickelodeon’s parent company, Viacom, to deliver content beyond its own channels. It is an expansion of an existing partnership with Netflix, for which Nickelodeon produces the animated series Pinky Malinky.

During Viacom’s fiscal first-quarter earnings call, CEO Bob Bakish confirmed that Nickelodeon Studios will partner with Netflix in a two-movie deal. One will be a Loud House movie (a family comedy about a Michigan boy growing up with 10 sisters) with the other being a Rise of the Teenage Mutant Ninja Turtles feature-length animated film. Bakish went on to argue why Netflix would be making and streaming these movies instead of Viacom. It will pull in a larger audience than the actual TV shows they’re based on. However, the Rise of the Teenage Mutant Ninja Turtles film will not be connected to Nickelodeon’s current animated TV series of the same name.

While they’ve been a worldwide phenomenon since their animated debut in 1987, this deal with Netflix would mark the first TMNT animated feature-length film since 2007’s animated TMNT was released theatrically.

Outside of television and animation, the TMNT most recently appeared on the big screen in 2016’s Teenage Mutant Ninja Turtles: Out of the Shadows. It was announced this year that a reboot of the film series was in production.
Season 1 of Rise of the Teenage Mutant Ninja Turtles is currently airing, with a second season in development. New episodes air Saturdays at 9:30 a.m. on Nickelodeon.

(‘Star Wars: The Mandalorian’ Will Honor The Spirit Of The Original Trilogy)