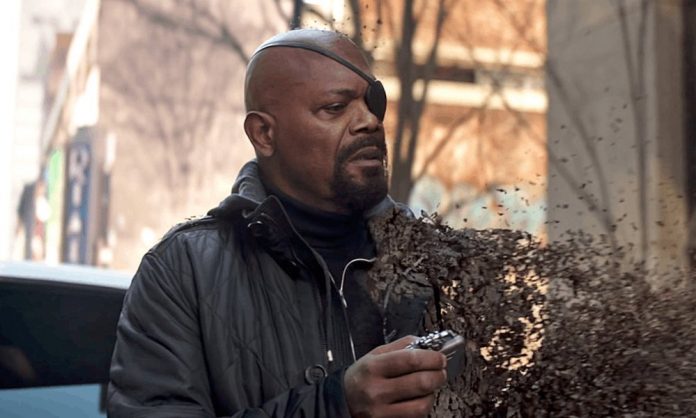 Nick Fury’s been staging a major comeback in the MCU of late. His cameo during the post-credits scene of Avengers: Infinity War was the first time we’d seen the former S.H.I.E.L.D. director since 2015’s Avengers: Age of Ultron and now he’ll have significant roles in at least two of 2019’s Marvel flicks, in the form of Captain Marvel and Spider-Man: Far From Home. Given this, everyone expects him to show up in Avengers: Endgame, too.

During his appearance on The Jonathan Ross Show with his Captain Marvel co-star Brie Larson, Jackson was asked whether or not Nick Fury would return in the climactic final film of Phase 3. “No, why would I be?” he said. “I don’t have any superpowers, I can’t fight battles. No, I’m not in it.”

Of course, given the amount of secrecy surrounding Marvel Studios films, Jackson may be fudging the truth to avoid ruining any surprises.

Do his statements on The Jonathan Ross Show mean he’ll remain a pile of dust? Not necessarily. He has been heavily featured in the Spider-Man: Far From Home trailers, so — even if Fury doesn’t return in Avengers: Endgame — it looks like he survived somehow.

Jackson will return to the MCU soon in the upcoming Captain Marvel, which takes place in the 90s and will feature a younger Nick Fury working alongside Carol Danvers as they fight a Skrull invasion.