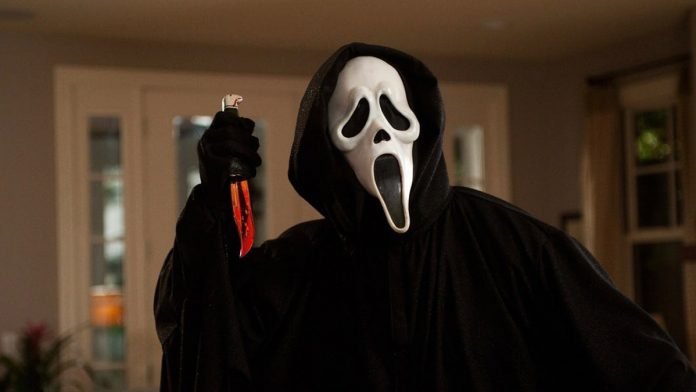 Scream (2022) gets its own Ghostface emoji on Twitter ahead of the trailer’s release. The Scream franchise began back in 1996 with the seminal satirical slasher film, Scream, written by Kevin Williamson and directed by horror legend Wes Craven. The film follows Neve Campbell as Sidney Prescott, a teenager in the fictional town of Woodsboro, California, who becomes the target of a mysterious serial killer in a Halloween costume known as Ghostface. David Arquette and Courteney Cox also star.

While many believed the series was over after 2011’s Scream 4, the popular slasher franchise is returning with a fifth installment set for release in January 2022. Simply titled Scream, the film will see the return of Ghostface, along with original stars Campbell, Cox, and Arquette. Melissa Barrera (In the Heights), Dylan Minnette (13 Reasons Why), and Jack Quaid (The Boys) join the cast as new characters. The upcoming relaunch/sequel will be the first in the series not helmed by Wes Craven, who passed away in 2015. Matt Bettinelli-Olpin and Tyler Gillett take over as directors.

Now, Scream has gotten its own Ghostface emoji on Twitter. As announced by the official Twitter account for the Scream series, fans can use the hashtag #Scream and an emoji resembling the iconic masked killer will appear next to it. The tweet also teased, “Be prepared… something’s coming,” seemingly hinting at the release of the film’s trailer. Check out the post below:

It was recently announced that the Scream 2022 trailer will be debuting at a special 25th-anniversary screening of the original Scream on October 11 in London. It was assumed that the trailer would arrive online sometime after that, but this cryptic tweet coupled with the Ghostface Twitter emoji has fans on social media speculating that something else could be in store. With the film’s release set for January, Paramount would be wise to release the trailer online during the month of October when excitement for slashers is at its yearly peak.

Plot details for the upcoming Scream are being kept firmly under wraps, and co-director Tyler Gillet says the trailer will reflect that by not spoiling any of its major twists or turns. The film’s synopsis indicates it will follow a young woman returning to her hometown who encounters horrific murders tied to Ghostface, but there has been a mysterious aura surrounding the film suggesting it will be much less straightforward than that. Hopefully, the trailer for Scream 2022 arrives online sooner rather than later.