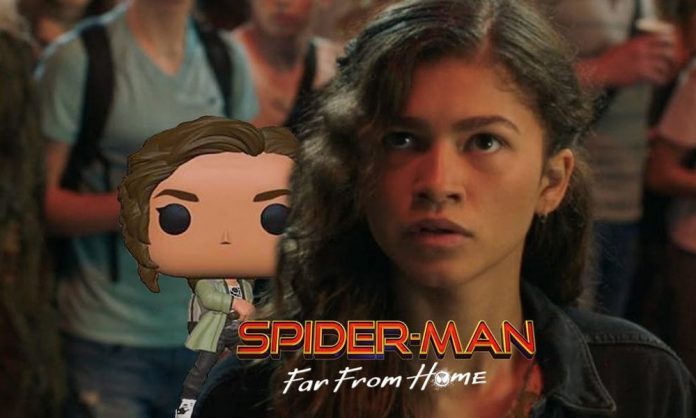 Funko has launched their first wave of Pop figures from the upcoming Sony and Marvel film Spider-Man: Far From Home at New York Toy Fair 2019! One of the newest Funko Pops for Far From Home reveals a battle-ready MJ. What’s interesting is that the figure shows her holding a mace and posed for a fight.

Zendaya debuted as MJ in Spider-Man: Homecoming. The end of the film confirmed that she is the Marvel Cinematic Universe version of Mary Jane Watson. Mary Jane is a major love interest for Peter Parker in the Marvel Universe, but MJ was a supporting character in Homecoming. The film instead focused on Peter’s romantic relationship with Liz Toomes (Laura Harrier), the MCU version of Liz Allan. Liz left the school, which now opens up the possibility for Peter and MJ to become closer in the sequel.

The new Spider-Man: Far From Home Funko Pops were revealed at the 2019 American International Toy Fair in New York City, and among them is one of MJ wielding a mace. While it’s unclear what MJ is up to in the movie that would lead to her wielding this weapon – let alone who she might be wielding the weapon against – it’s evident that she will have a much more active, battle-ready role in the new film. Check out the all the other new figures below.

Spider-Man: Homecoming director Jon Watts is returning to direct the sequel. Tom Holland reprises his role as Spider-Man. Returning supporting cast includes Michael Keaton as the Vulture, Zendaya as Michelle, and Marisa Tomei as Aunt May. Cobie Smulders and Samuel L. Jackson have also been confirmed as returning to their Marvel Cinematic Universe roles as SHIELD agents Maria Hill and Nick Fury, respectively. Jake Gyllenhaal debuts as the villain Mysterio, though he’s been described as an ally recruited to assist Spider-Man in the film.