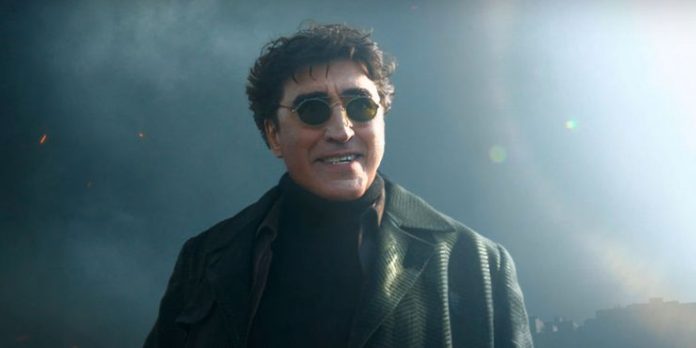 Spider-Man: No Way Home will see the titular superhero face off against Doc Ock and several other supervillains from across the many Spider-Man film franchises. A new still gives audiences a better look at how much of a threat Ock will be and how much help Peter will need to fight him.

A still released by Empire showcased Spider-Man in the Iron Spider suit he donned in Avengers: Infinity War and Avengers: Endgame. Chasing after him is Doc Ock, now out from the smoke and on the streets, flinging cars aside he as rampages across the highway.

Talking about Peter’s upcoming fight with Ock, actor Tom Holland explained, “When I was first pitched the idea, I was like, ‘Wow, that would be awesome if we could pull it off… But there’s just no way it’s going to work. You’re just not going to be able to get everyone to do what they need to do. It’s just not going to happen.’ But it did happen. And it’s crazy.” In the same interview, director Jon Watts teased the scale of the upcoming film. He explained, “We’re definitely trying to be ambitious,” and called the film “Spider-Man: Endgame.”

Much of the conversation surrounding Spider-Man: No Way Home revolves around the rumored appearance of past film versions of Spider-Man– those played by Tobey Maguire and Andrew Garfield. Speculation has only increased since the release of Spider-Man: No Way Home‘s first trailer was released, since — aside from Doc Ock — the trailer seemed to hint at appearances from Willem Dafoe’s Green Goblin, as well as Jamie Foxx’s Electro.

Adding to it are the recently released covers for the Spider-Man: No Way Home-focused Empire issue, which seemed to confirm the inclusion of yet another familiar supervillain: Sandman from Sam Raimi’s Spider-Man 3. It also seemed to tease the appearance of Mysterio.

There were plans for the master illusionist in Raimi’s Spider-Man 4, but the film itself never came to fruition. Mysterio didn’t appear in live-action until Spider-Man: Far From Home. There has been speculation since the film’s release in 2019 that Jake Gyllenhaal will return and there are several theories that Mysterio somehow faked his demise at the end of the film.

The last time Alfred Molina’s Doc Ock was seen on the big screen was in 2004 in Spider-Man 2. The film saw Ock perish at the bottom of the Hudson, having redeemed himself by tearing his destructive fusion machine down after being shown the error of his ways.