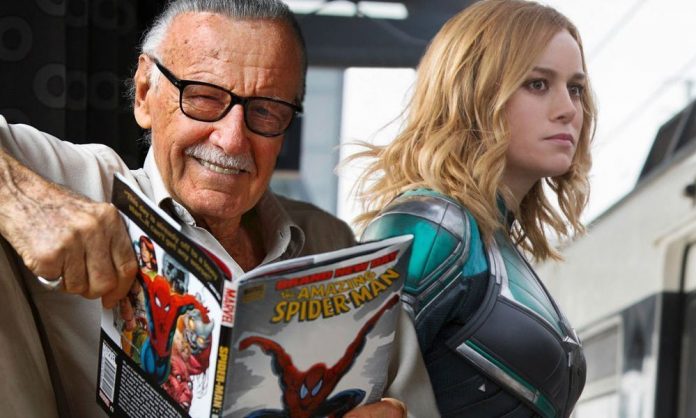 Warning: This post contains spoilers for Captain Marvel. Read at your own risk.

As the first Marvel Cinematic Universe film to be released after Stan Lee’s death, Captain Marvel is paying special tribute to the late comics legend.

Lee has played a wide variety of bit roles across all 21 MCU movies, from a FedEx delivery man in Captain America: Civil War to a patient in a mental institution in Thor: The Dark World. Most of Lee’s characters were unnamed, and Lee’s cameo in Guardians of the Galaxy Vol. 2 seemed to confirm the long-running fan theory that he was actually portraying a Watcher Informant. However in Captain Marvel, Lee cameos as someone he’s never played before in the MCU: Himself.

Early on in Captain Marvel, the titular hero arrives on Earth and is tracking a Skrull, eventually being led onto a crowded train. On the train, she makes eye contact with a familiar old man in glasses, who’s reading a script for Kevin Smith’s Mallrats. As he’s rehearsing his lines to himself — “Trust me, true believer” — Carol gives him a smile and a nod.

It’s a sweet tribute that fits right in with the film’s 1995 setting: Mallrats was released the same year and featured Lee popping up to offer romantic advice to Brodie (Jason Lee). Lee himself said Mallrats was one of his all-time favorite cameos to film this link opens in a new tab, so Captain Marvel directors Anna Boden and Ryan Fleck decided that was the perfect way to honor him — by depicting exactly what he would have actually been doing in ’95.Ultimately, Lee’s cameos in MCU movies are fun nods to the man who created many of the superheroes who star in this successful franchise. With cameos across all 21 movies, there simply may not be a way to make Lee’s roles all connect and make sense within the continuity of the MCU. In the case of Lee’s cameo in Captain Marvel, it’s something a little different and a perfect hat tip to the film’s 90s setting.