Home Movie News ‘Star Wars: The Rise Of Skywalker’ Up Close Look At The Knights... 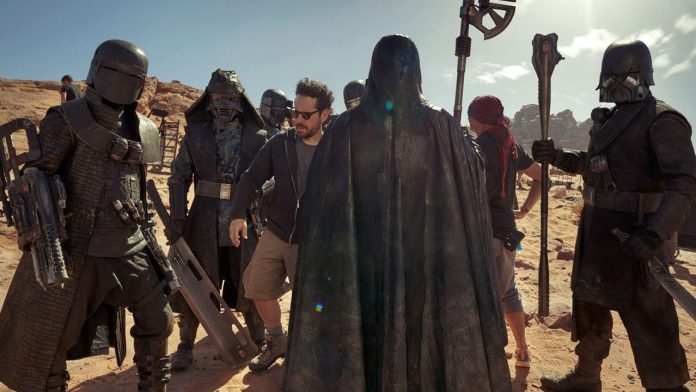 A new promo image gives fans one of their best looks thus far at one of the Knights of Ren in Star Wars: The Rise of Skywalker.

A Knight of Ren graces the cover of Star Wars: The Rise of Skywalker: The Visual Dictionary, giving fans their best look at a member of the team. There are at least six members of the crew with different get-up and weapons, albeit they dress up in all-black ensembles. This one carries a “vibro-sycthe blade,” and it seems like he may also have an additional lightsaber-looking weapon hooked on his waist. Check out the image below:

After they were ignored and barely referenced in Star Wars: The Last Jedi, the Knights of Ren are back in the forefront. Director J.J. Abrams introduced the group in the first film of the sequel trilogy, which created a lot of mystery and intrigue among the core fan base.

When the Knights of Ren first appeared in The Force Awakens, they seemed to be in cahoots with Kylo Ren. But in Star Wars: The Rise of Skywalker, it appears like there was a falling out between them.

How much do you think J.J. Abrams is going to utilize the group in Star Wars: The Rise of Skywalker? Let us know in the comments below!

Minions 2: The Rise of Gru Gets a Summer 2020 Release Date