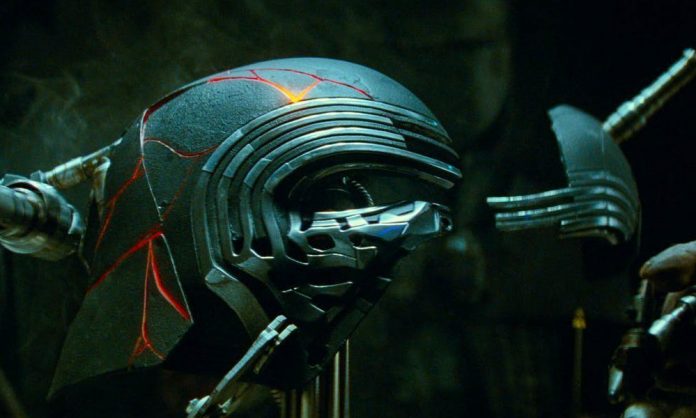 The packaging, which can be seen below, will be used to house The Rise of Skywalker products starting October 4, 2019 – which is being referred to as Triple Force Friday. This will be a celebration that will involve product sets for The Rise of Skywalker, The Mandalorian and Star Wars Jedi: Fallen Order. Package reveals for those product lines will come at a later date. Those at Star Wars Celebration Chicago will get a chance to take photos in a life-size replica of this packaging.

One shot in the new trailer that attracted a lot of attention was Kylo Ren’s fractured helmet (which he shattered in The Last Jedi) being welded back together by a mysterious individual with a furry hand. It was first reported late last year the mask would come back in Episode IX, and now it’s going to be a prominent feature of the movie’s marketing campaign.

Kylo was seen in the trailer sans helmet, so he’s clearly not going to wear it for the entire movie. Surely, more details about the mask will be unveiled in the coming months, hopefully shedding light on why Abrams and company went in this direction.