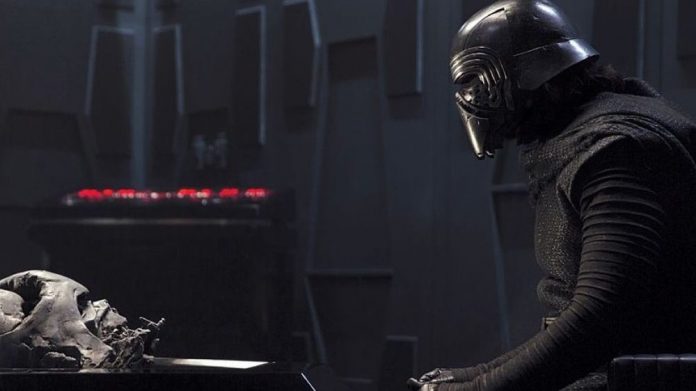 A brief glimpse at Star Wars: The Rise of Skywalker played at the D23 Expo today and delivered fans a look at where Darth Vader’s helmet has been since Star Wars: The Force Awakens.

What we know about Star Wars: The Rise of Skywalker largely comes from the film’s panel at Star Wars Celebration earlier this year. That is where the cast and Abrams appeared to discuss the movie and debuted the first Star Wars: The Rise of Skywalker trailer. The footage proved just how little we knew about the film, as it ended with confirmation that The Emperor (Ian McDiarmid) is returning. One of the other major takeaways from the panel, though, was Abrams talking about Rey, Finn, and Poe (Oscar Isaac) going on an adventure together.

The 10-second tease of The Rise of Skywalker was shown during a Disney Legends panel, depicting Kylo Ren opening up a container that had been keeping Vader’s helmet safe. In addition to a look at the helmet, the footage featured multiple brief shots of the rest of the heroes, with Rey delivering a line to Finn, “It’s too dangerous. I have to go alone.” This line seemingly confirms the reports that at least a portion of the film will see Rey embarking on one mission while Finn and Poe embark on their own.

Vader’s mask played an important role in Star Wars: The Force Awakens, but then was completely absent from Star Wars: The Last Jedi. Since it was a thread that Abrams established, it isn’t too surprising to see him bringing it back for Star Wars 9. When it was previously on screen, it was in the possession of Kylo Ren, who used it to try to speak with his grandfather and avoid the draw of the light side. In killing Snoke and taking place as Supreme Leader of the First Order, Kylo cemented his place on the dark side of the Force.

Later this weekend, D23 will focus more on The Rise of Skywalker, possibly offering up more footage.

Star Wars: The Rise of Skywalker lands in theaters on December 20th.