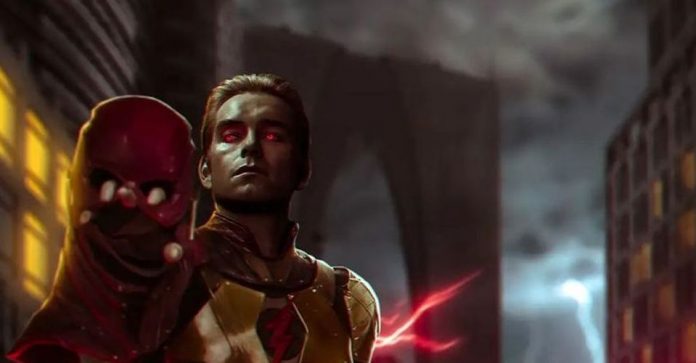 New fan art has emerged imagining The Boys actor, Antony Starr, as Reverse Flash. The actor is perhaps best known for portraying Homelander on the Amazon series, which is about to enter its third season. The Amazon series recently wrapped production on the latest season, but no release premiere date has been announced yet.

Though The Flash has one of the deepest rogues galleries in DC Comics, Reverse Flash is arguably his greatest foe. Real name, Eobard Thawne, the character is a supervillain from the future with speedster powers similar to the ones displayed by the red-clad Justice League hero. To date, he has never appeared in a live-action movie, but he has been played on the small screen by Tom Cavanagh and Matt Letscher in the Arrowverse. Additionally, Thawne has appeared in numerous video games and animated DC adaptations over the years.

With season 3 of The Boys on the way and a Flash movie nearing the end of production, new fan art has emerged that blends those two properties. Specifically, content creator ApexForm has posted an image to Instagram imagining what Antony Starr could look like as Reverse Flash. Check it out below:

The image above clearly takes inspiration from the DCEU version of The Flash. It shows a mockup of Starr in a Reverse Flash costume modeled after the one worn by Ezra Miller’s Barry Allen, with a blurry image of Barry knocked out in the background. Though there is currently no indication that Reverse Flash will actually appear in the upcoming Flash solo movie, this gives a good idea of what a silver screen showdown between the characters could look like. While there is no actual evidence that Starr will play Reverse Flash, the caption of the image notes that, with the 2021 DC FanDome coming up, more casting announcements for DC-related projects could be on the horizon.

The reaction to this mockup has already been positive online, lending credence to the notion that Starr might actually be a good choice for the role. He has made a massive impression on audiences with his psychotic-yet-charismatic portrayal of Homelander on The Boys, and many of those menacing traits could potentially transfer well to a portrayal of Reverse Flash. That said, audiences will have to wait and see what happens. The Boys season 3 does not currently have a release date, but DC fans can look forward to The Flash when Barry Allen’s solo film debuts on November 4, 2022.