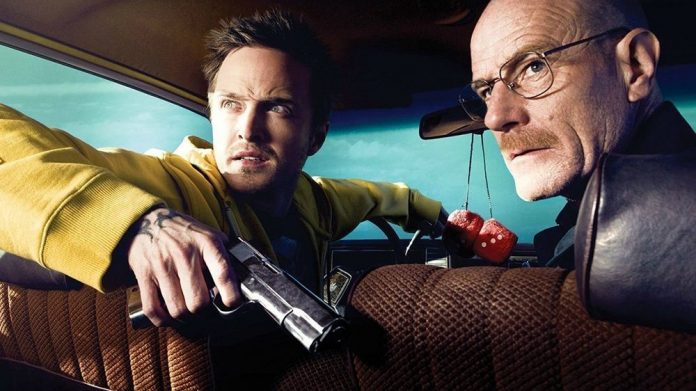 After months of speculation, Breaking Bad cast member and spinoff Better Call Saul star Bob Odenkirk has confirmed that a reported film set in the world of the acclaimed AMC series has completed filming. Talk of the project first popped up last fall, when it was reported Vince Gilligan was writing and directing a sequel to the acclaimed TV series, with Aaron Paul reprising the role of Jesse Pinkman. Going by the codename Greenbrier, the movie reportedly rounded out a cast of several familiar Breaking Bad faces (including Bryan Cranston) and lined up a premiere on Netflix and AMC. And while there was plenty of talk about the film, AMC and the principal talent never officially confirmed it.

While promoting the upcoming fifth season of Better Call Saul, Odenkirk revealed that principal photography on the continuation film, featuring the return of Aaron Paul as Jesse Pinkman, has wrapped in secrecy.

“I’ve heard so many different things about it, but I am excited about the Breaking Bad movie. I can’t wait to see it,” said Odenkirk in an interview with The Hollywood Reporter. “I don’t know what people know and don’t know. I find it hard to believe you don’t know it was shot. They did it. You know what I mean? How is that a secret? But it is. They’ve done an amazing job of keeping it a secret.”

Since the Breaking Bad movie is already complete, it remains to be seen when AMC will make an official announcement. The network has been extremely quiet on this matter since word of a Breaking Bad continuation first came out, but sooner or later they’ll have to say something.

Filmed on location in New Mexico, the movie reportedly follows Jesse as he attempts to rebuild his life after escaping the drug dealers that kept him hostage for a year. Cast members Bryan Cranston, Krysten Ritter and Jesse Plemons are rumored to reprise their roles in an unknown capacity. The film is produced by Sony and expected to air on AMC and Netflix sometime in 2020.