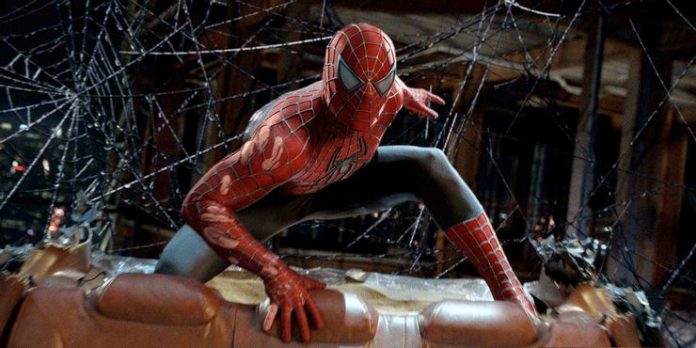 Tobey Maguire’s costume from Spider-Man 3 is for sale, and one lucky fan has a chance to own it. Released in 2007, Spider-Man 3 saw Peter Parker (Tobey Maguire) struggle to balance his romantic life with Mary Jane Watson (Kirsten Dunst) while battling three villains, including former friend turned foe Harry Osborn (James Franco), Sandman (Thomas Hayden Church), and Venom (Topher Grace). When it opened, Spider-Man 3 had the biggest opening weekend of all time and was the highest-grossing film of 2007 at the domestic box office.

While a box-office hit, Spider-Man 3 received mixed to negative reactions from critics and fans. The troubled production and delayed Spider-Man 4 eventually led to Sam Raimi stepping away and the series being rebooted with Andrew Garfield in the title role in The Amazing Spider-Man. While it has been fourteen years since Tobey Maguire’s Spider-Man graced screens, his incarnation of the character holds a special place in the hearts of many, with many hoping to see him return to the role in the upcoming Spider-Man: No Way Home.

TMZ is reporting that Prop Store is holding an auction of more than 1,000 pieces of film and TV memorabilia, and one of those pieces is Tobey Maguire’s red and blue Spider-Man suit used in Spider-Man 3. The spider suit is expected to go for around $70k. The auction will be held from November 9 to November 11, 2021.

Designed by James Acheson (the costume designer for the first Spider-Man film) and Katina Le Kerr, the design is a tweaked version of the costume from Spider-Man 2 by designer Deborah Lynn Scott. While different from the classic suit from the comics, the Spider-Man suit from the Sam Raimi films is an iconic piece of film memorabilia, and to an entire generation is the iconic Spider-Man suit. The costume was so beloved that there was a massive fan camping to get the suit into Insomniac’s Spider-Man game for the PS4, and the creators made it available as a free DLC for fans that holiday season.

The fate of the Spider-Man 3 costume and its future now remains up in the air. Whoever buys it could keep it as part of a private collection or donate it to a museum where it can be admired for generations. The Academy Museum of Motion Pictures or the upcoming Lucas Museum of Narrative Arts would be appropriate places for the suit to reside. Spider-Man is now as major a part of film history as he is comic book history. The costume could even be purchased to be worn for conventions, Halloween, or to visit Children at Hospitals.