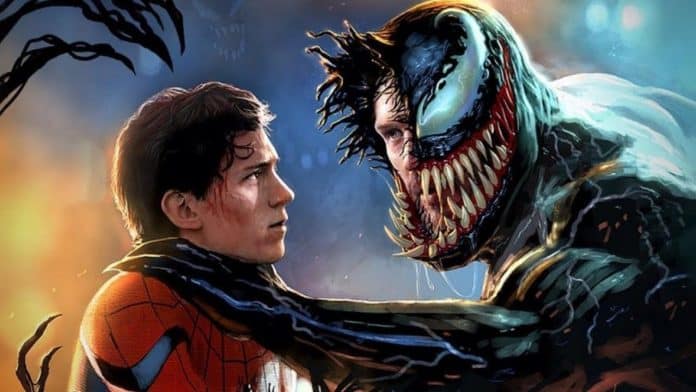 Tom Hardy shares art of Venom eating Spider-Man in honor of Halloween – and then deletes it. The English actor first played the role of journalist and symbiote-host Eddie Brock in 2018’s Venom, which kicked off Sony’s Spider-Man Universe of interconnected films. Hardy just reprised his role in the sequel, Venom: Let There Be Carnage, which opened wide in the US on October 1.

After Sony executives decided to collaborate with Marvel Studios and allow Spider-Man to join the Marvel Cinematic Universe, where he is played by Tom Holland, they saw the potential for a universe of their own based around characters associated with the friendly neighborhood hero. After Venom proved a financial success, the two studios renegotiated their agreement to allow Spider-Man to be shared between the two universes, practically guaranteeing Hardy and Holland a showdown somewhere down the line. That confrontation seems to be coming sooner than anticipated, however, as the Venom: Let There Be Carnage end credits scene saw Brock and Venom cross into the MCU, setting them up for an as-yet-unconfirmed appearance in December’s Spider-Man: No Way Home.

Adding fuel to that fire, Hardy shares a piece of art on Instagram featuring Venom about to chomp down on Spider-Man, only to then delete it mere minutes later. In the image, the superhero’s head is surrounded by the lines that traditionally indicate his Spidey-sense, suggesting he’d probably swing his way to safety just in time, but the Venom: Let There Be Carnage actor surely would’ve contested that reading. His caption wished fans happy holidays and “Halloween snacks,” cheekily referencing his character’s unique appetite for both brains and chocolate.

If Hardy’s Venom does appear in Spider-Man: No Way Home, he’ll join a stacked cast of legacy villains. The film’s trailer revealed that, as a result of a spellcasting mishap, Doctor Strange cracks open the multiverse, allowing a number of characters from past Spider-Man film franchises to invade the MCU. That footage offered fans their first new look at Alfred Molina’s Doctor Octopus from Spider-Man 2 in more than a decade, while Jamie Foxx has also been confirmed to reprise his role as Electro from The Amazing Spider-Man 2.

Hardy’s post-and-delete will have fans spinning as they wait for their next look at Spider-Man: No Way Home to potentially confirm his involvement. Marvel Studios head Kevin Feige might’ve given the game away at the recent Eternals premiere, though, when he revealed that the filmmaking teams behind No Way Home and Venom: Let There Be Carnage worked on that bombshell of an end scene together. Still, audiences will have to wait for something more official to actually start celebrating – and just in case Hardy was dropping hints, they might want to keep an eye out for any new material dropping on Halloween.