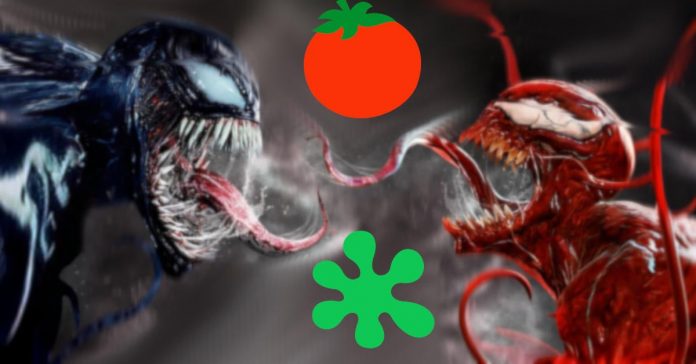 After months of delays due to the COVID-19 pandemic, Venom: Let There Be Carnage is finally hitting theatres this evening. The Tom Hardy-led sequel brings in Woody Harrelson as Carnage, one of Venom’s most sinister foes. Behind the camera, this time is Andy Serkis, who has doubled down on the first film’s insane and bonkers moments (remember that lobster tank scene?!). It looks like Hardy’s second go about as Venom will please fans as the film’s Rotten Tomatoes score is shaping up nicely.

While we weren’t the biggest fans of Venom: Let There Be Carnage, the general perception around the film seems to be mostly mixed to positive. Rotten Tomatoes revealed the initial Tomatometer score an hour after reviews dropped. It stood at 72%, a fresh rating, with 29 reviews.

Now that it has been a couple of hours since reviews dropped, the Rotten Tomatoes score for the Venom sequel has slightly dipped to 64% with 70 reviews. Not a bad showing at all. On the other hand, the first Venom stands at 30% with 357 reviews. Tom Hardy recently touched upon how the first film was decimated by critics, but it’s clear that’s not the case this time around. Obviously the Venom: Let There Be Carnage number will change in the coming days as more reviews trickle in but it’s safe to say Hardy’s second time as the symbiote will skew more towards the positive side of the scale rather than the rotten.

Let There Be Carnage begins playing in theaters on Oct. 1.