Home Movie News Which Movie Will Have The Better Opening Weekend? 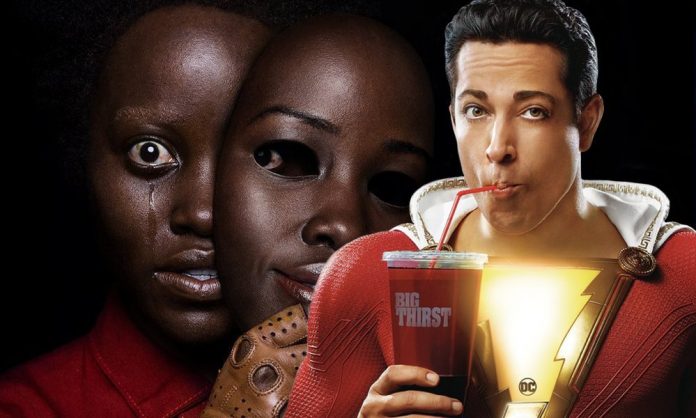 So which will it be, a horror movie, Us, or comic book action/comedy movie, Shazam!, that takes reign over the box office? Us hits the big screen this weekend followed by Shazam!’s opening next weekend. Even though these two movies fall into separate genres, there can only be one winner, and that is determined by the millions of movie gurus out there with their tickets bought and hyped attitudes.

First, let’s examine Us and what it has to offer. Now me personally, horror movies are hands-down my favorite movie genre. First off, Us is said to exceed Jordan Peele’s prior movie, Get Out, in all standards of a horror movie: spookiness, suspense, and gore (my personal favorite). Get Out, in my opinion, was an excellent thriller but only that. Where as, Us exceeds Get Out in all three of the above horror-movie criteria; thus, well-deserving of a description as a horror movie. With all three standards being brought to new heights, Peele’s highly anticipated follow up, Us, will deliver an increased complexity and high tension from beginning to end, with carnage and slaughtering almost never coming to an end – exactly my style!

Next, let’s examine what Shazam! is bringing to fight night. Now it might not fall into my personal favorite genre but that does not take away the fact that it is on my ‘must-see’ list especially due to the actor John Glover, whom starred in my favorite childhood tv series Smallvillle. Shazam! is bringing a much-more different appeal than its competitor, Us, by staying on the light-hearted side of life. I feel safe in saying that this comic book movie will definitely be far better than 99% of the already released comic book films. The comic relief, which appears in Shazam! trailers, seems to bring out my hard-to-reach, innate laughter. This is all done while still satisfying the necessary characteristic of any action movie, kicking ass and taking names.

In the end, there can and will be only one winner but who will it be? We will follow the box office numbers for both weekends to find out. Although belonging to two totally different genres, Us and Shazam! both seem to be top-quality movies, each with their own style that will put up a great fight till the end. Both, the nail biting horror and the on the ground “oops I think I just peed my pants” laughter movies will do well. But if i had to guess based solely on numbers, Shazam! will destroy all movies on @ the box office due to the extreme amount of views across all Shazam! movie trailers.