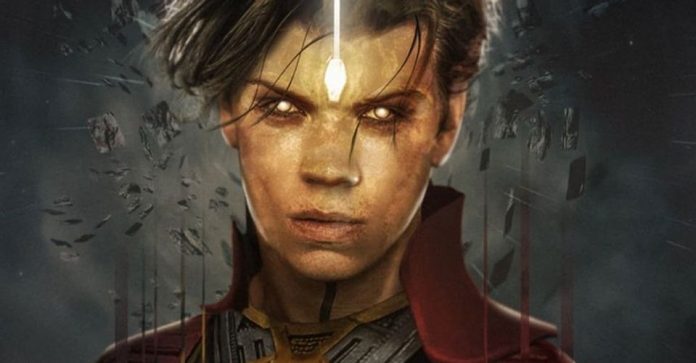 It will also feature a major introduction, as confirmed by some big casting news on Monday. After being teased in one of the post-credits scenes for Guardians of the Galaxy Vol. 2, powerful superhero Adam Warlock will make his MCU debut in Vol. 3. Will Poulter (Detriot, The Maze Runner) is set to play Adam, and Gunn swiftly welcomed him to the Guardians family after the casting was made public. Reportedly, Poulter beat out actors like George MacKay and Regé-Jean Page for the part because his audition was just too good to ignore.

Adam Warlock is a character Marvel fans have waited a long time to see, so it’s no surprise that fan art has already sprung up imagining what Poulter will look like in the role. In a new piece shared online by graphic artist Bosslogic, Poulter is depicted with Adam’s cosmic powers and an updated costume. If his final appearance in Guardians of the Galaxy Vol. 3 is anything like this art, then fans will be very, very pleased. Check it out below.

Poulter’s Guardians of the Galaxy Vol. 3 casting has largely been met with positive responses from fans, and much of the excitement comes from simply knowing Adam Warlock will be in the movie. In the past, Gunn was coy about Adam’s potential introduction, even hinting that Vol. 2‘s very pointed setup might not lead to anything in its follow-up. At long last, though, one of the most powerful figures in the Marvel universe will be joining the film franchise, and it’ll be quite exciting to see how he’ll fit in.

With Guardians of the Galaxy Vol. 3 nearing the start of production, more casting announcements could emerge in the coming weeks. Gunn has been careful to keep things a secret, whether that be the fate of the Guardians or what songs are on the soundtrack. As Guardians of the Galaxy Vol. 3 is still well over a year away, fans have a long time left to wait. The Adam Warlock news was the biggest update to arrive in a while, and hopefully it won’t be as long before the next one emerges.