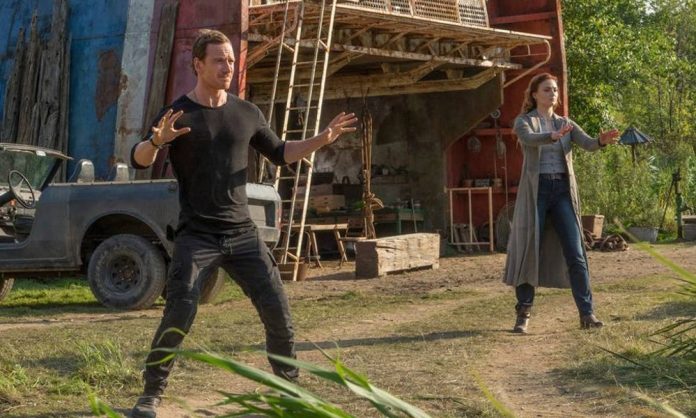 Dark Phoenix introduces the island nation of Genosha in the X-Men movies universe.

The newest sneak peek comes from Empire, revealing a picture of Jean Grey and Magneto at the famed X-Men comics’ location, Genosha. The picture shows Jean and Magneto in similar stances, presumably using their individual powers to train as Jean seeks “much-needed advice” from the Master of Magnetism. In Dark Phoenix, the island is Magneto’s mutant paradise – a lush, green haven that he’s built upon using metal junk he’s summoned from the sea.

During a panel at Ace Comic Con, Fassbender explained Magneto’s role on Genosha.

“Well I think, you know, Genosha’s a pretty cool idea and always it’s that thing with Magneto, you can’t really argue with his philosophies in some ways, but his methods, of course, are very extreme,” Fassbender says. “But what he’s done in Genosha is kind of cool because he’s sort of stepped out of the conflict, if you will, and said, ‘Okay, you know, just give us this place that’s our own and just leave us be and we’ll be self-sufficient and anybody who’s willing to sort of not bring violence to the area and sort of pitch in and do their part, then they have a home there and they’re welcome there.’ And I think, you know, it’s a pretty cool philosophy. And there’s only something that happens outside of Genosha that sort of drags him away from this place that he’s set up. But it was cool when [director] Simon Kinberg was developing Genosha and we were walking around it and it’s like, it’s sort of off-the-grid, self-sustained community. It’s pretty beautiful. But then of course, then you see the other side of him once he makes the decision to do something it’s go big or go home.”

Director Simon Kinberg has eagerly awaited the chance to introduce the famous X-Men location to the cinematic universe, saying, “Genosha is something that I’ve always been fascinated by. It’s sort of an Oz for mutants. As a Jew, its parallels to Israel and the notion of the promised land intrigued me even as a kid. I was looking in previous X-Men movies for a way to incorporate it. It was something I thought about for Apocalypse, but then went in a very different direction.”